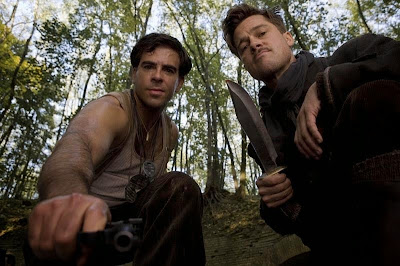 Tarantino’s WWII film is far more fun than any war film has a right to be. It might not rank up amongst Tarantino’s best films but it is highly enjoyable and features some impressive performances and moments of real tension.

Originally planned to be Tarantino’s next film after completing Jackie Brown in 1997, Inglourious Basterds has been long in development. With many rumours over the years regarding casting (the film was originally intended to star Michael Madsen with names such as Adam Sandler and Eddie Murphy amongst those rumoured to have been cast), the Inglourious Basterds now being released is far different than what might have been imagined a decade before. With Brad Pitt the only member of the cast that is easily recognisable, the film itself, its story and structure are different than what might have been expected of Tarantino if made pre-Kill Bill. The resulting film though, while perhaps not living up to such heady expectations, is nevertheless highly enjoyable laced with humour, Tarantino’s usual flair for catchy dialogue and violence whilst also including some of the most tense sequences the director has ever filmed and featuring some memorable performances from its main cast.

The Basterds are a special forces unit lead by Lt. Aldo Raine (Pitt) and consisting of Jewish soldiers with a mission to slaughter as many Nazis in occupied France as possible whilst scalping and disfiguring the corpses to put fear into the hearts of other Nazi soldiers. The Basterds soon become involved in Allied plot to kill most of the Nazi high command when it is learned that they will be attending the première of Goebbels latest propaganda film in Paris and must liaise with a German actress turned spy named Bridget von Hammersmark (Diane Kruger). Meanwhile Emmanuelle (Laurent) is a Jewish cinema owner in Paris concealing her identity after her family was slaughtered by Nazis years before. When Zoller (Daniel Bruhl), a Nazi soldier/actor with an interest in Emmanuelle, convinces Goebbels to launch his film premiere at Emmanuelle’s cinema, Emmanuelle plots her own revenge against the Nazis at the premiere. The plots of both Emmanuelle and the Basterds though face an obstacle in an infamous Nazi soldier/detective named Hans Landa (Waltz), known as the “Jew Hunter” who was responsible for the death of Emmanuelle’s family and is now leading the security for the premiere in which Hitler will also be in attendance.

Employing the same storytelling structure of chapters and chapter cards that he started in Kill Bill Vol 1, Tarantino brings the same novelistic approach to Inglourious Basterds. The approach works quite well as, in spite of the film’s title, the story of the film is as much Waltz’s Landa’s and Laurent’s Emmanuelle’s as it is about Pitt’s Raine and his team. With the chapters developing each character’s storyline almost back and forth, the various threads weave together for one final chapter where the build up throughout the film erupts in violence and death. The opening chapter to Inglourious Basterds is, perhaps, the film’s most memorable and filled with tension as the multi-lingual Landa, uses his various language skills to have a conversation with a farmer who may be harbouring Jews on his land. Keeping the farmer and the audience on edge with a mixture of natural charisma and mounting unease as he moves from humorous to serious gradually, and effectively, builds Landa up to more menacing and complex than the usual Nazis portrayed on screen. In comparison to Landa, Raine and his Basterds are almost cartoon caricatures. Committed to the killing and torturing of Nazis without mercy, few outside Pitt’s Raine, Eli Roth’s “Bear Jew” and Til Schweiger’s Hugo Stiltz get much screen time, let alone dialogue. Their gung-ho attitudes, Raine’s Tennessee drawl and the surprisingly enjoyable balance of violence and humour in their characters and actions makes their scenes very enjoyable though it is Landa and Emmanuelle’s stories which are the most gripping. Emmanuelle’s story is the most emotionally involving of the film, aided by a winning performance by Laurent, as her anger, her need for revenge is keenly felt as is her fears, particularly of those involving Landa. A scene involving Landa and Emmanuelle talking over dessert is as tense as the film’s opening since Tarantino had effectively established the danger lying beneath Landa’s charming, overly casual demeanour and Emmanuelle’s pain is stirring. Not everything in Inglourious Basterds does work however. Tarantino’s depiction of Hitler in the film crosses too far into farcical and the lack of development of the Basterds themselves makes them hard to truly engage with beyond a humorous level though the final minute of the film where Raine exacts a bit of vengeance will generate cheers of approval.

Of the film’s performances, it is Christoph Waltz and Melanie Laurent that most impress. Both get to play complex characters and both actors are able to deliver layered performances. Laurent especially should move audiences with her pain and her plight while Waltz manages to be equally likeable and despisable even within the same scene. Both are actors whose performances mark them as talents to watch out for in the future. Brad Pitt is very clearly enjoying himself on screen as Aldo Raine and such enjoyment is keenly felt making his performance very likeable while Kruger puts in a very decent performance as Bridget von Hammersmark while Michael Fassbender personifies British ‘stiff upper lip’ as Archie Hilcox. Daniel Bruhl effectively balances likability and creepiness in his performance as the Nazi/actor Frederick Zoller and Eli Roth and Til Schweiger stand out the most memorably of the little seen and little developed Basterds under Raine’s command.

Overall, Inglourious Basterds might not be Tarantino’s best film or even live up to the expectations that have been built for the film over the last decade but it is certainly very enjoyable. Tarantino makes the film far more enjoyable than any WWII has a right to be whilst mixing in some truly tense scenes and includes some very memorable performances from Waltz, Laurent and Pitt. Tarantino fans especially should enjoy the film.