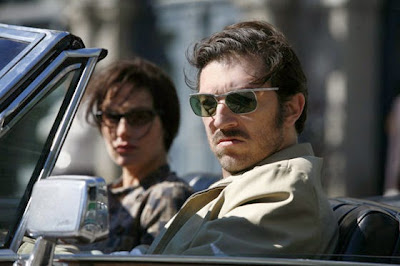 An engaging crime-biopic that features an excellent central performance by Vincent Cassel and isn’t afraid to portray its subject’s flaws more prominently than his more well-remembered traits.

Originally planned as a single film chronicling the life of French gangster Jacques Mesrine, differences between Vincent Cassel and the director over the film lead to a change of director, an expanding of the story to allow for a more in depth, complex portrayal of its subject and the project becoming two films instead of one. The first film, Mesrine: Killer Instinct, portraying Jacques Mesrine’s induction into the world of crime and subsequent rise to the status of Public Enemy No 1 is a gripping affair with a very strong performance from Cassel.

After retiring from the military following a period in Algeria in 1959, Jacques Mesrine (Cassel) returns to Paris and pursues a career in organised crime after meeting with local crime boss Guido (Depardieu). His subsequent success within Guido’s organisation conflicting with his rebellious nature puts him at odds with other crime figures and with the law seeing Mesrine having to abandon the family he has gained to hide out in Montreal where his criminal exploits and time in prison make him an unlikely icon and therefore the French’s most wanted criminal.

Whilst somewhat episodic in nature, frequently experienced in biopics, Mesrine: Killer Instinct is nonetheless an engaging drama throughout and certainly more impressive than Hollywood’s own crime biopic this summer, Michael Mann’s Dillinger film Public Enemies. A large part of the enjoyment of this film likely comes from its near fearless approach to its subject matter and from Vincent Cassel’s commitment to giving a balanced portrayal of Jacques Mesrine. Acknowledging from the beginning that no film could accurately portray the life of Jacques Mesrine and that there will be elements of fiction as events are dramatised, the director, Richet, is still willing to take risks and rather than portray Mesrine as a charming rogue, a Robin Hood like figure, he is willing to portray the cruel and violent side of Mesrine perhaps even more willingly than his more charming traits. A tense opening sequence in Algeria where Mesrine, as a soldier, refuse to shoot a woman demonstrates the rebellious nature of the character but it is often the women in his life that suffer the most from his rising career in crime. Unflinching in his willingness to use violence in his job, his loving nature in regards to his children is offset by his treatment of his wife in later years. Having offended other figures in Paris through his temper, Mesrine flees to Montreal where embarks on far more notorious career as a bank robber, kidnapper and escaped convict, often with partner in crime Jeanne (De France) which involves them being dubbed the French Bonnie & Clyde. While sometimes feeling as though following the usual formula of convict in prison and convict escapes prison, these sequences in the latter half of the film are well made and impress in the near-unbelievability of what Mesrine achieves and a later attempt at breaking others out of prison thrills more than any sequence from Mann’s Public Enemies.

Mesrine: Killer Instinct also benefits from many impressive performances. Vincent Cassel carries the film almost effortlessly with the dangerous, violent side of Mesrine balanced quite effectively with the character’s charming, loving side helped all the more by Cassel’s own image from playing similar roles throughout his career. Cassel’s commitment to portraying Mesrine’s more negative attributes as believably as his charming ones makes his performance a more satisfying affair than Hollywood attempts with similar characters where the likeability of their characters are usually given preference. Gerard Depardieu is very enjoyable in a rare dark role as crime boss Guido, Elena Anaya portrays the conflicts of Sofia, Jacques Mesrine’s wife, over her husband’s lifestyle effectively and Cecile De France is satisfying as Jeanne though her role gets less development than that of Jacques Mesrine or his wife.

Overall, Mesrine: Killer Instinct is a gripping and complex portrayal of one of France’s most notorious criminals. With a willingness to portray the character’s good and bad sides both the film, and Cassel’s performance as Mesrine, are very satisfying and you’ll certainly be left eager to see what happens next in the second half of this saga in Mesrine: Public Enemy No 1.