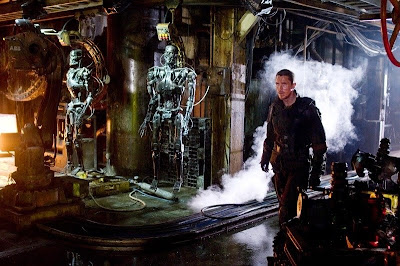 An enjoyable addition to the Terminator franchise that, despite some flaws in plot and characterisation, still entertains with some exciting action sequences and interesting exploration of the Terminator mythology.

After the lacklustre attempt to revive the Terminator franchise with Terminator 3: Rise of the Machines which adhered too closer to the familiar format of the franchise and also, unwisely, parodied its own history at times, studios have chosen to alter the format for Terminator Salvation. It is a smart move, taking the storyline past Judgement Day to the world of humans fighting machines first glimpsed in The Terminator in 1984 with John Conner now an adult and facing the destiny that the machines were intent on preventing him meeting in earlier instalments.

In spite of the attempts of the machines to prevent the birth and the rise of John Conner in The Terminator and Terminator 2: Judgement Day and despite the attempts by John and Sarah Conner to prevent the machines even taking control in the future, Judgement Day has still happened. Now, in 2018, the human race is reduced to small groups of survivors and resistance fighters being hunted by machines. John Conner (Bale), now an adult and a leading member of the resistance movement, is struggling to defeat the machines and fulfil the destiny laid out before him to be the saviour of the human race. When Conner learns that the machines are searching for Kyle Reese (Yelchin), a man Conner is yet to meet and a man Conner knows is destined to travel to 1984 to save Conner’s mother and father Conner himself, he is left facing the threat of his own existence ending. Meanwhile Marcus Wright (Worthington), a man who died on death row prior to Judgement Day but has turned up alive with no memory of the intervening years, is trying to escape Los Angeles with Reese and learn the truth behind his resurrection.

As approaches to the franchise go, Terminator Salvation is very interesting one that allows for audiences to finally see the bleak future previously teased and engage in the exciting potential, for action and sci-fi fans, of witnessing larger scale conflict between mankind and machines. In these aspects Terminator Salvation is quite effective and certainly entertaining. The future is visualised as an Earth that is part Mad Max-style desolate wasteland with humans surviving in camps and with equipment cobbled together from whatever they can salvage, with huge industrial plant-style epicentres where the machines base their operations and build more machines to send out after the remaining pockets of human kind scattered beyond. The various machine designs are also quite impressive from familiar models like Hunter/Killer ships and, later in the film, the T800 robots to earlier attempts at humanoid machine models (T600s), huge machines that collect and imprison humans and smaller motorcycle models that hunt down stragglers. Also quite enjoyable are the action sequences themselves whether they be the chase sequence where Wright and Reese attempt to escape Terminators to the showdown between Wright, Conner and a T800 (sporting a very familiar face) in the finale.

Less satisfying though, is that Terminator Salvation struggles to develop as much interest and drama from its characters and their own struggle as it does in its concepts. While Christian Bale is dependably gruff as a fighter and as a leader of fighters, he rarely gives, or is given opportunity to show, Conner’s humanity as while the future would harden Conner, gone is cockiness and vulnerabilities that Ed Furlong possessed in his younger incarnation. Several members of the supporting cast are similarly underdeveloped and underperformed including Bryce Dallas Howard as Conner’s wife and Common as Conner’s second in command. Moon Bloodgood is somewhat more impressive giving her feisty rebel some intensity and personality. The more satisfying characters and performances come from Sam Worthington and Anton Yelchin as Wright and Reese. Worthington, whilst not too charismatic gets more drama to exploit when he discovers the truth about his existence while Yelchin gives the young Kyle Reese the hints of the strengths his character is seen possessing in adulthood (as played by Michael Biehn) in The Terminator whilst also showing strength in the face of inner emotional turmoil that is reminiscent of Linda Hamilton’s performances as Sarah Conner in earlier films.

Overall, Terminator Salvation is quite enjoyable. The action is enjoyable and the visualisation of the future quite impressive and there are performances that range from satisfactory (Bale) to impressive (Yelchin) but some of the flaws in the plot (how were the machines even aware of Reese at all at this juncture?), too many underdeveloped characters and missed opportunities to properly explore the emotional drama of John Conner means Terminator Salvation is an enjoyable addition to the franchise but not an outstanding one.