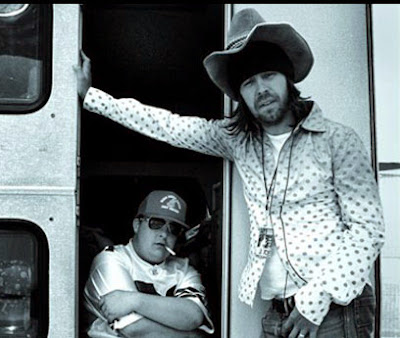 A fairly short, slight but still funny rock mockumentary from low budget filmmaker Shane Meadows which generates many laughs from its improvised situations and dialogue and a memorable performance from Paddy Considine.

With a long history of making films on a low budget, with mostly amateur actors and on short time-spans, Shane Meadows’ latest effort is his quickest shoot since his feature debut (filmed over five days) and featuring a character that he and actor Paddy Considine had been developing since the start of their careers together and is also his funniest effort to date and a nice departure, for Meadows as well as audiences, into comedy from the kitchen-sink dramas with which Meadows has so frequently been involved with.

Shane Meadows is filming a documentary on an infamous local roadie named Le Donk (Considine) as he about to go on tour with the Artic Monkeys and also try to achieve his own dream of stardom by getting a local rap artist named Scor-zay-zee (as himself) an opportunity to perform on stage. With his estranged ex-girlfriend also expecting to give birth to Le Donk’s son any day and Le Donk’s own delusions of talent threatening to upset both Scor-zay-zee’s chance at fame and Meadows’ documentary, Le Donk has the opportunity to achieve a lifelong dream and perhaps change his own ways for the better.

Having developed the character of Le Donk in their personal time over the years and basing his attitude and mannerisms on roadies that Meadows and Considine have known, they succeed in bringing the character of Le Donk to life with the lack of a script and the reliance on improvisation working out as a strength for the. All false bravado and macho posturing, Le Donk is a person whose long association with famous musicians, despite that association being as a roadie moving their equipment rather than as a friend or artistic partner, has led Le Donk to believe his own hype. The personality is one that should feel familiar to many audiences and allows Le Donk to be entertaining when his ego proves to be his downfall at times in a manner reminiscent of Steve Coogan's Saxondale or Ricky Gervais’ characters in The Office or Extras but with a working class shine that Meadows has proven effective in portraying in his films. With many big scenes being as improvised as the dialogue, such as Scor-zay-zee’s practice performance on a Manchester stage that actually attracts the attention and appreciation of the Artic Monkeys, Le Donk often feels less like a mockumentary and actually like an authentic documentary with everything being filmed as it happens and with many cast members whether it be rapper Scor-zay-zee, Shane Meadows himself and other members of the film crew actually playing themselves with Le Donk being the only, major fictional character in the film.

Paddy Considine leads the cast as Le Donk who delivers a very entertaining and memorable performance. Considine gives Le Donk just the right amount of swagger and ego to the character whilst also being able to show Le Donk as appearing genuinely vulnerable when his ego and anger get the better of him leaving him in situations he can’t control. Scor-zay-zee, an actual Nottinghamshire rapper, is highly likeable in comparison to Le Donk who succeeds as the film’s true underdog who success is due more to his own actions than Le Donk’s and despite his lyrics not being to everyone’s tastes proves to be an adept performer. Like Scor-zay-zee, many of the supporting characters are members of the film crew playing themselves with Shane Meadows playing a large role as the director of the documentary on Le Donk which allows for some interesting breaks in the fourth wall of film narrative as Le Donk will turn to his director for advice on the scene with the only other manufactured characters in addition to Le Donk being his ex-girlfriend Olivia (played by Olivia Colman) and her new boyfriend.

Overall, Le Donk is a very entertaining mockumentary with the plausibility of its characters and their story strengthened by the low budget nature of the film and the amount of improvisation on hand. The film might only just be long enough to be considered a feature length film and its production values seemingly make it a better candidate for a TV movie than for cinema but audiences should nevertheless find the film entertaining.