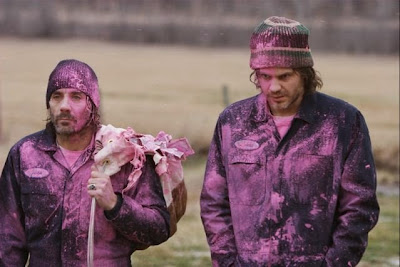 A very entertaining, low budget comedy about a bunch of morphine-addicted ex-cons who try to rob a bank during the 1980s.

Filmed on a small budget in Canada, set in the 1980s, starring little known actors (Timothy Olyphant of TV’s Deadwood being the most high profile name in the cast) and covering the already well worn ground of heist films and heist comedies, High Life comes to cinema screens with very little hype and manages to entertain thanks to the performances of its cast and the sharpness of its script generating many genuine laughs and a satisfying amount of sub-text (with horses being one particular theme representing a dream of freedom).

It is 1983 and ex-con Dick (Olyphant), is working as a janitor at a local hospital to finance his morphine addiction without resorting to crime. When his old cellmate Bug (McIntyre) turns up and gets him fired, Dick comes upon a novel idea on robbing a bank to set himself up for drugs for years when he realises the potential of newly installed cash machines as a target for a heist. Enlisting his somewhat unstable cellmate Bug, tech-savvy conman Donnie (Anderson) and the fresh faced ladies man Billy (Rossif Sutherland, son to Donald and half-brother to Kiefer), a plan is formed to use a cash machine scam to score a larger payout as long as he can hold his crew together in the face of their infighting and drug addictions.

With a cast of characters that consist of crooks and drug addicts, setting High Life in 1983 is a move that works in the story’s favour (based on a play, High Life was originally given a contemporary setting). With cash machines/ATMs a relatively new innovation at that period and more open to exploitation by criminals (since the population still coming to grasp with keeping pin numbers secret so early after the technology’s implementation) it allows for two things. First, it makes the likelihood of our cast of characters succeeding in their plan more believable and secondly, it represents the changes and advancements in society from the 1970s into the 1980s with old routines falling behind and the danger old crooks face if they don’t adapt to the progress. High Life also benefits by keeping its cast small and their goals modest. These are not men looking for a huge score and retiring to a tropical island. These are men who just want money to pay for their drug fix with the most grand ambition being Dick’s desire to by a horse ranch, or at least make a deposit on one with his cut of the takings. These are not master criminals and their humble goals make them, somehow, more relatable and likeable.

High Life‘s script, with its simple premise and simple heist, allows for more time to be spent with the film’s characters. Without a large ensemble to cover or an overly elaborate plan to rob the bank, High Life instead allows audiences time to know the dreams of its characters and their relationships with each other. With most of the cast having studied the behaviour of morphine addicts prior to the filming of High Life, proper time is given to the mannerisms of their characters. No mere caricatures of drug addicts, the performances here are enjoyable for the believable amount of nervous tics and behaviour rather than overdoing such behaviour to the point of becoming too broad a stereotype. The cast also possess an enjoyable amount of chemistry with a 15 minute sequence set in a car being very gripping and funny despite it being driven along mostly through dialogue than action. The dialogue itself is also very funny and feels more natural by generally avoiding the obvious gags.

All the cast members give layered performances too. Timothy Olyphant handles the lead role of Dick quite well as the non-violent mastermind of the heist who is barely in control of his crew, particularly the overly irritable and violent Bug. Bug is perhaps the most interesting character and performance with Stephen Eric McIntyre keeping the character suitably brimming with anger that threatens to overspill at inopportune moments but who is also emotionally vulnerable because of his addictions and anger. Joe Anderson is likeable as the jittery Donnie and Rossif Sutherland is highly likeable as the laid back Billy whose addictions stretch to women as much as morphine.

Overall, High Life is a very enjoyable little comedy. Its smaller budget, lesser known cast and tighter focus on its characters over it’s plot allows the humour and characters to shine. A surprisingly entertaining film.