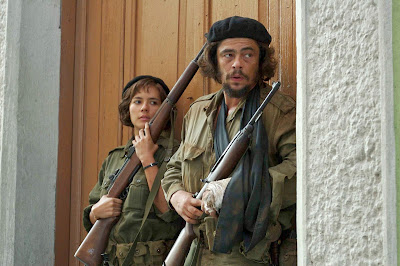 Two well made, well acted and ambitious films by Steven Soderbergh that show the rise, and fall, of the man known as ‘Che’ Guevara which, while light on giving us personal insights into the mind of ‘Che’, nevertheless present to us his actions and his legacy very well.

Soderbergh’s first film dealing with the life of Ernesto ‘Che’ Guevara is likely the stronger of the two films. Dealing with Che’s more well known period, that of his role in the 26th of July Movement in Cuba and the Revolution that put Fidel Castro in power, it was also the period where Ernesto Guevara became known as ‘Che’ and developed much of the ideology and skills as a Guerilla, that would serve him throughout the remainder of his life.

More experimental in its narrative (in keeping with the style of storytelling Soderbergh has been known for in previous films like Out of Sight, The Limey and Solaris), we get Che’s involvement in the Cuban Revolution through flashback, and in color, while giving an interview to reporter Lisa Howard (Julia Ormond) whilst in the US to speak before the United Nations with these scenes told in black & white. Portraying Che as an enigmatic character throughout is move that seems somewhat risky yet makes for a stronger portrayal as it avoids the trap of editorializing Che’s actions by assuming his thoughts and feelings instead portraying his actions and words as seen by those around him. Benicio del Toro delivers a strong, restrained performance as Che also. Keeping Che’s feelings hidden by deciding not to assume the emotions he may have felt and putting them in into his performance, del Toro instead portrays Che as slightly distant allowing Che’s words to speak for him.

The decisions made by Soderbergh and del Toro might not result in a film that grips on emotional level in terms of its characters, but it nevertheless grips through its portrayal of Che’s actions and of the events of the Cuban Revolution. From the initial meeting of Che and Fidel Castro in Mexico and the decision to stage a revolution, through the early skirmishes on Cuba and Che’s role as a surgeon and trainer and his development into a leader of men is gripping. The cinematography is excellent, capturing the scope of the country and of the conflicts but maintaining a gritty, handheld feel that often puts the audience into the action, results in some intense and well choreographed battle sequences. The conflicts between Castro and Che’s army and those of Batista, the dictator at the time, build up in size and scale as the Revolution gains strength with victory after victory culminating in a large, extended battle sequence set in Santa Clara involving conflicts in the streets, on rooftops, with tanks and the derailment of a train that both impresses in the effectiveness of how the conflict is portrayed within the film but also in how it demonstrates the efficiency of the Revolution, and Che’s ability to stage a successful campaign against the Cuban military.

Culminating with the Revolution, and Che’s biggest victory, Che Part One is a film of optimism, showing the rise of a man who would forever be idolized as a symbol for revolution against oppression.

The second film in Soderbergh’s portrayal of the life of Che is an altogether different affair. Forgoing much of the narrative experimentation shown in Che Part One, Part Two takes a more straightforward approach starting several years after the success of the Cuban Revolution and following Che as he departs Cuba and begins attempts to stage a similar revolution in Bolivia.

Che Part Two is a harder film to watch. Part of this is due to Che’s period in Bolivia, his post-Cuba years, being less publicized, less well-known than his successes in Cuba and also because the attempted revolution in Bolivia failed, leading to the capture and execution of Che. As such, the optimism present in Part One is absent here as Che discovers more resistance to his ideas amongst the people of Bolivia, due to infighting between Communist Party members over the way a revolution in Bolivia should be handled and also due to the intervention of the US in aiding the Bolivian Government in tracking and stopping Che’s soldiers.

Continuing to portray Che from a distance in Part Two also succeeds less in giving us insight into Che than it did in Part One. Where we saw Che grow through his experience, his actions and his words in Part One, the failures he faces in Bolivia, the struggles and the frustration that comes with it are only hinted at in the portrayal of Che himself. One scene in particular where a sick, and frustrated, Che struggles to get his horse to cooperate leading him to attack the animal is intense in its portrayal of a man struggling with failure but such scenes are infrequent and the toll on Che himself is left mostly unexplored. The decision to also start the film several years after Part One’s conclusion also means that Che’s period as a family man, a father and husband, are left unseen outside of his farewells to them which like later scenes in the film where Che loses his temper, hint at the sacrifice he is making by leaving but again is left unexplored and thus not allowing audiences to see aspects of Che’s life outside of his role as a Guerilla.

The conflicts and their presentation in Part Two remain well told and effective in conveying the intended tone of the film. Where in Part One we saw victories and an ever expending army for the cause of Castro and Che, leading to bigger conflicts and bigger victories, the conflicts in Part Two are less successful leading to smaller skirmishes, frequent failures and an ever decreasing force as soldiers die but support for the cause diminishes resulting in fewer recruits. The feeling of hopelessness faced by Che and his soldiers is keenly felt in Part Two and is effective in generating sympathy for the man and for the people of Bolivia that he tries to help.

Overall, Part Two is a less satisfying film than Part One. It might be effective in its portrayal of the conflicts within Bolivia and the struggle faced by Che’s movement but it is somewhat less successful in portraying the effects upon Che himself. Also, where as the casting of del Toro as Che is effective as is the casting of, mostly, unknowns as his fellow soldiers works well in adding believability to the performances, Part Two does feature a brief but distracting appearance by Matt Damon in a non-English speaking role that, however brief, in an distracting reminder that this is a film. However, stability to the tone of the film is soon restored and the film’s ending with the capture and execution of Che is well handled and certainly difficult to witness as it is intended to be.

In conclusion, Che Parts One & Two are both very good films standing well together as one larger film but able to stand together individually. Part One is the much stronger picture of the two with the methods of portraying the events in Che’s life as well as Che himself benefiting the film more than it does in Part Two. Part Two is certainly intense and more difficult to like than Part One but in its role in portraying the fall of an icon and in balancing the optimism in his rise throughout Part One, it succeeds. The distant nature of its portrayal of Che may not please some audiences but it nevertheless effectively portrays the actions of the man leaving much of the decision over whether he was a good man in addition to a good leader and soldier up to the audience to decide.