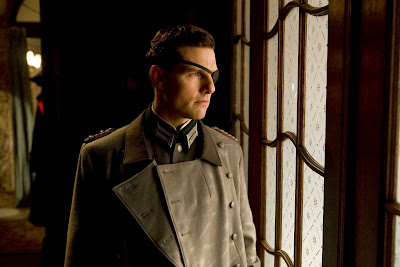 An enjoyable drama/thriller about the last attempt, by Germans, to assassinate Adolf Hitler in 1944 that, while possessing some tense and thrilling scenes during the attempt itself, but doesn’t quite delve deep enough into the mindset of those that planned it.

Given Hollywood’s tendency to demonize Germany when depicting its population in WWII-era films, painting most as Nazis or Nazi-sympathizers, it means that sometimes a reminder is necessary that not all of the population supported Hitler and some changed their minds about him enough that they attempted to kill Hitler, 15 times. Of course, as Hitler’s famous suicide in his bunker tells you, none of those assassination attempts succeeded but Valkyrie tells the story of Operation Valkyrie, the last and possibly most ambitious attempt to, not only assassinate Hitler, but to also wrestle back control of Germany from his supporters.

The message of Valkyrie is hammered home quite memorably early in the film by Kenneth Branagh’s Major Tresckow when he says: “We have to show the world that not all of us are like him. Otherwise, this will always be Hitler's Germany.” In this, Valkyrie does succeed quite well. The lengths that Tom Cruise’s Colonel Stauffenberg and his colleagues go to too achieve their goals and the risks they take are clearly on show. All can be executed for treason if caught and Stauffenberg’s family is at risk if he fails. The risks at stake mean, quite understandably, that once the decision to launch Operation: Valkyrie is made; the tension rises dramatically over whether Stauffenberg will succeed as unforeseen obstacles come into play to prevent success. An early attempt to assassinate Hitler with a bomb in a briefcase leads to a tense moment as Stauffenberg must wait for confirmation from his group over whether to proceed, all the time his enemies are stood nearby and, of course, the main event itself is tense when Stauffenberg is forced to flee the scene of a blast to enact the next stage of Operation: Valkyrie without being able to confirm whether the blast has killed Hitler whilst also unaware that his allies, having not had confirmation either, are putting the plan at risk by waiting. These scenes and the eventual Coup are well executed, in particular the moments featuring those unaware of Stauffenberg’s betrayal of Hitler such as the Commander of the Reserve Army being deployed by Stauffenberg and the control room operators receiving contradictory orders from both Stauffenberg’s people and Hitler’s.

While Valkyrie is successful in thrilling audiences in its latter half, earlier scenes where Stauffenberg is brought into the plot against Hitler, lack the same energy. More satisfied in allowing the fact that these men are plotting against Hitler to set them apart from other Nazis, the film rarely attempts to explore their true motivations especially as some dialogue in scenes reveals that some only doubt Hitler because the war efforts are failing. That no mention is made of the atrocities committed by the Nazis or our plotter’s feeling about them, feels odd. As such, the early, preparatory scenes for the plot lack the tension of later scenes which is somewhat disappointing when debate can be as tense and exciting as action.

Performances in Valkyrie are pretty good. Cruise is efficient enough as Stauffenberg, wearing and eye-patch and missing a hand, and he carries the film quite well even though the role never challenges Cruise to really explore any deep emotion. Supporting Cruise at Stauffenberg’s fellow conspirators is an impressive cast of British Actors including Kenneth Branagh, Terrance Stamp, Bill Nighy, Tom Wilkinson, Eddie Izzard and Jamie Parker. While the cast is impressive, most actors play to type, rarely getting any really memorable moments: Stamp is the distinguished gentleman throughout, Nighy is the reluctant General afraid to make important decisions without proper support and Wilkinson is the Colonel General who is ambitious but willing to side with whoever is the victor. The most impressive and memorable performances, go to the lesser known members of the cast. Jamie Parker plays the loyal aide to Stauffenberg, willing to believe in the cause and risk his life if necessary, Christian Berkel is an explosives expert who serves as the films and his fellow conspirators’ conscience and Eddie Izzard also impresses with a rare serious role.

Overall, while never delving as deep into the reason’s behind these men’s actions or truly why we should support them beyond the fact that they were trying to kill Hitler, Valkyrie still succeeds as a thriller in its later scenes and the performances, while not outstanding, are certainly worthwhile. In its attempts to prove that not all Germans were like Hitler at that time, Valkyrie succeeds and entertains.