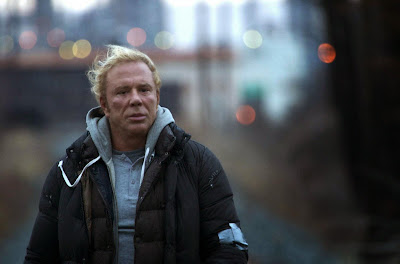 An excellent drama featuring an Oscar worthy performance from Mickey Rourke in, perhaps, the finest role of his career.

A man, once a star in the 1980s, is now, 20 years later, washed up, beaten up, his fame fading into obscurity, his life lived by whatever work he can get and rejected by his family. On the surface, the story of The Wrestler mimics that of, actor, Mickey Rourke’s own career so closely you’d be forgiven for thinking the film took inspiration from Rourke’s career almost directly. Rourke, once hailed as a promising star, and potential Marlon Brando in the 1980s with performances in films like Diner, Rumblefish and Angel Heart, Rourke then went onto to one bad film choice after another. His acting career failing, he returned to boxing, a career he held in his earlier years, suffering from failures there too leaving him in receipt of frequent injuries resulting in numerous operations that were unable to restore the good looks with which he possessed in his earlier years. Returning to acting, Rourke has since struggled to make an impression with little more than supporting roles, the exception being a starring role in Sin City, albeit one that required heavy make up leaving him unrecognizable. In The Wrestler, and the role of Randy ‘The Ram’ Robinson, Rourke has finally achieved a role, and delivered a performance, worthy of all that potential he displayed 20 years prior and one that will hopefully, finally restore him to prominence.

The Wrestler tells the story of Randy ‘The Ram’ Robinson, a professional wrestler who, while a big star in the 1980s and early 90s, found his career on the wane as he grew older. With his looks reduced through injuries sustained in the ring and having to rely on steroids to give him the strength to compete in his later years, he still relishes the ring, the cheer of the crowds but finds himself reduced to performing smaller events, or matches involving actual violence on the amateur circuit just to provide him with the income to pay for his trailer, keep him in steroids and allow him time with the only person he feels shows him respect, a local stripper who is in a similar position to Randy in finding herself unable to compete with younger colleagues. When a heart attack forces him into a position where he must give up wrestling altogether, Randy tries to build a normal life, start a relationship with the stripper he cares for and reconnect to the daughter he neglected by focusing on his wrestling career. The story of The Wrestler appears to fairly traditional, however it is the execution that elevates the story into the gripping character study that it is. Rourke infuses Randy with a weary sadness that can be assumed is something Rourke himself has felt before yet there is optimism too. His attempts to court Cassidy (Tomei), the stripper with whom he feels he shares a connection, generates warmth even if his attempts seem futile. The same can be said of his attempts to reconcile with his daughter (Wood) and in his interactions with his fellow wrestlers before and after performing a show. In spite of all Randy’s failures and weaknesses, he remains a sympathetic character and one whom you hope succeeds in finding happiness again.

Aronofsky, in addition to the excellent casting choices of Rourke and Tomei, makes many smart directing decisions in his portrayal of Randy’s story and the world of wrestling in which he inhabits. While fully aware of the falsehoods within most professional wrestling matches, in that the fights are staged, choreographed, Aronofsky smartly chooses not to ridicule the sport (aptly now called sports-entertainment) showing genuine camaraderie between wrestlers that lies beneath the in-the-ring rivalries put on display to the fans. There is also moments that highlight some of the actual violence that can occur in wrestling from accidents in the ring to amateur/underground matches where wrestlers engage in actual acts of violence as part of their performance as seen in one particularly brutal scene where Randy’s post-fight treatment is inter-cut with moments from the match showing how each injury was sustained. Also, in addition to a suitably moody score by Clint Mansell, Aronosfky subtly works the cry of the crowds into Randy’s life most notably used as Randy, now working a deli counter in a supermarket, imagine the roar of fans as he approaches the shop floor only for everything to, this time, go silent upon stepping out onto the stage/floor. Mixing sadness with hope throughout the film, The Wrestler concludes with one last chance to return to the ring and perform once more. With echoes of Rocky the finale is also bittersweet with an ending that be as easily interpreted as a happy ending as it could a sad one.

Overall, The Wrestler is a gripping, stirring drama. It achieves what should be impossible, in generating true sympathy for a man down on his luck, restoring to prominence an actor who bears much in common with his role whilst also highlighting the humanity of an much adored, if mocked, American sport. A truly satisfying and rewarding film.