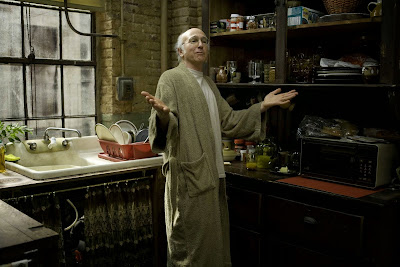 The combination of Woody Allen and Larry David certainly results in a film that has some entertainment value but the collaboration does not live up to either David’s Curb Your Enthusiasm or Allen’s other Manhattan based comedies like Annie Hall.

Woody Allen’s later years as a director has been a mixed bag of results. For each Melinda and Melinda or Match Point which have been well received, there has been and Anything Else or Cassandra’s Dream that has been poorly received. With many of his most recent films having been made out of the US and his most recent, Vicky Cristina Barcelona being particularly well received, Woody Allen now returns to Manhattan, home of his greatest films, with Whatever Works which rides high on expectations since it sees Curb Your Enthusiasm star Larry David taking his first leading role in a film. The result though is somewhat disappointing with David enjoyable but less so in Allen’s film, with Allen’s script that in his own, more improvised work.

Boris Yelnikoff (David) is an eccentric physics graduate once nominated for the Nobel prize in physics and is now a self-confessed genius and near-recluse that rarely leaves home except to talk to his few friends about how other people waste their lives. When one night he encounters a homeless girl named Melodie (Evan Wood), Boris shows an uncharacteristic sign of kindness by taking her home however, Boris then finds it difficult getting her leave and the girl’s naivety testing to his patience and intellect. Melodie though, develops a crush on Boris despite a massive age difference between them and despite the advances of other, younger men and the disapproval of her parents who insert themselves into Melodie, and therefore Boris’, lives causing further upheaval in Boris’ life.

Whatever Works is a Woody Allen film that, on the surface, looks ideal. It is set in Manhattan, features a somewhat neurotic male lead, deals with themes of happiness and romance and features Larry David, writer/star of TV’s Curb Your Enthusiasm and writer of Seinfeld in the lead role. However, what would appear to be the film’s strengths turn out to be its weaknesses too. Many of the themes, characters, situations and even lines seem overly familiar having seen them covered several times before by Allen in other pictures where even the best lines often feel like they’ve been said before them being so typically Allen. Some themes/situations also feel familiar to the point of tired with some like the age difference between the two leads and its effect on their relationship feeling more and more like Allen justifying his own off-screen life choices every time he uses it. Larry David also feels out of place in the film despite seeming like ideal casting at first glance. The reason for this soon becomes clear that while some of the humour between David and Allen seems similar, David succeeds better in the more improvised format of his TV shows than he does following a script and this shows here where the humour and situations feel restrained by sticking to Allen’s script and rarely shows sign of life.

Larry David does make for an entertaining lead even if his performance lacks in comparison to any work where David has had a hand in the script as his inexperience in performing a role other than himself and sticking to a script is evident in his delivery and the general lack of spontaneity in the film. Nevertheless, David is reliably grumpy and witty with his best moments when he addresses the audience in the manner Allen himself once did in his earlier films. Evan Rachel Wood is much more likeable. While her character sticks pretty closely to innocent and ditsy stereotypes even as her character becomes more educated but the performance is still hugely likeable and more sympathetic than David’s Boris. Ed Begley Jr. and Patricia Clarkson both entertain as Melodie’s melodramatic parents with their performances funny in spite of being occasionally OTT.

Despite his last film, Vicky Cristina Barcelona, being an impressive return to form and his new film returning him to Manhattan and pairing him with comedian Larry David, Woody Allen’s Whatever Works is fairly disappointing. Allen rehashes too much old material for this to satisfy and David, while still entertaining, is not as good when he isn’t improvising with his own material.