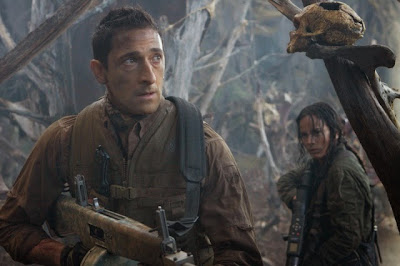 Better than other sequels to the original Predator film, Predators is very enjoyable even though it owes a lot to nods to the original film and does not really stand out as being very original.

The original Predator film in 1987 was a big hit and fast became a cult classic film with a memorable monster that has since stuck in the memory of action and sci-fi fans. The film’s first sequel, Predator 2, in 1990 was less well received due, in part, to the absence of Arnold Schwarzenegger and disappointing execution of its promising concept of relocating the action from the jungles to the city. No other sequels presented themselves afterwards with the Predator character living on in the form of comic books until 2004 saw the first of two Alien vs. Predator films that put the Predator up against another cult monster. Both films were disappointing, lacking memorable characters or humour and sticking to slasher film formula so Predators, produced by director Robert Rodriguez, comes to cinemas with a lot to live up to and, whilst not feeling particularly original, turns out to be far more enjoyable than any other sequel and certainly feels very much like a sequel the original deserves.

Waking up in freefall, mercenary Royce (Brody) lands in an unknown jungle and soon finds himself not alone when he discovers several other humans who have also been mysteriously dropped into the same jungle including black ops sniper Isabelle (Braga), a Spetsnaz commando, a drug cartel enforcer, a Sierra Leone death squad soldier, a death row convict, a Yakuza assassin and Edwin (Grace), a doctor. The group soon find that the jungle they’re in is not even on Earth and the one thing most of them have in common is they’re all predators in one way or another. They realize they are in a game preserve and they are the prey for a band of alien hunters and are forced to fight for their survival.

Produced by Robert Rodriguez and directed by Nimrod Antal, Predators feels like a sequel that maintains the spirit of the original film. There are many references to the first film and similar themes throughout. From bringing back the original score, to the jungle setting, familiar Predator technology and hunting methods, lines of dialogue and weapons like a mini Gatling gun, Predators generates much fun for fans of the franchise in spotting references but the film also offers moments that were only teased in the first film such as one-on-one knife fight between Billy in the first film that occurred off-screen now realized as a sword fight on screen between a Predator and the Yakuza character of Hanzo. Such tributes and fanboy-ish moments (the film also features a Predator vs. Predator stand off) show a love for the original film and respect for it as the events of the first film are even referenced directly as a plot point that allows the cast of characters to learn from those events and apply it to their survival strategy. However, while much entertainment is derived from its references to previous films, they also stand as one of the film’s weaknesses as Predators often feels too much like a retread of the original film. Predators also features some poor moments of CGI such as a sequence involving Predator-dogs that not only feels unnecessary to the plot in that it delays the moment when the Predators themselves get more involved, the effects also stand out as being unlike anything seen in the first film when many other effects feel in keeping with those used in the 1980s i.e. costumes and physical effects/stunts.

The cast in Predators is generally decent overall. While Predator in 1987 was short on name actors or characterization, it did benefit from the star power of Arnold Schwarzenegger in the lead role who was always convincing as a hero that could challenge a Predator. In Predators, that lead role goes to Adrien Brody as Royce. While Brody does deliver a dependable performance, one believable as an anti-hero, he is less convincing as a person capable of challenging a Predator even in spite of obvious efforts on Brody’s part to bulk up physically. Brody is still a decent lead but it’s Alice Braga who generates the most sympathy as a black ops sniper who at least has a code of honour that doesn’t strictly involve putting her own survival first. Amongst the rest of the cast there are few that really stand out. Walton Goggins is best served getting most of the memorable lines as a nervy, somewhat unstable death row convict and Laurence Fishburne is OTT in a cameo role. Topher Grace’s character and performance is the odd man out as the person who is out of place amongst the cast of killers but it leads to an interesting, if unsurprising and somewhat ridiculous twist later in the film but adds some additional comic relief when he is paired with Goggins.

Overall, Predators is certain to entertain fans of the original film through its frequent nods to the original and moments that fans have probably been longing to see on screen though this also means that there isn’t enough originality for the sequel to stand equal with the first film. Fun but not fantastic.