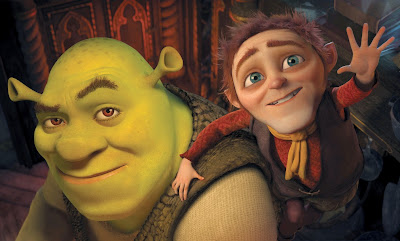 A fun sequel and a marked improvement over Shrek the Third which means this, possibly, final installment in the Shrek series leaves the series ending on a good note.

Following the success of Shrek and Shrek 2, the third film in the series Shrek the Third saw disappointing Box Office results and poor critical reception. With Shrek Forever After intended to be the last in the Shrek film series, though a spin-off film for Puss in Boots is in production, the pressure for the fourth film to be an improvement over the third and end the series in a manner both pleasing to audiences and critics is high. The resulting film is very enjoyable and while it doesn’t achieve the same heights as the first two Shrek films with its plot revisiting many scenes from those films, it is certainly a marked improvement over Shrek the Third and at least ends the series on a satisfying, though not spectacular, note.

Finding it difficult to settle into the domestic bliss of being a husband and a father, Shrek (Myers) finds his struggle to find privacy and time for himself leading him to miss the days when he was a real ogre and feared by the masses, where he had the freedom to do what he wanted whenever he wanted. After an argument with Fiona (Diaz), Shrek crosses paths with Rumpelstiltskin (Walt Dohrn) who, unbeknownst to Shrek, holds a grudge against him for saving Fiona years before preventing Rumpelstiltskin from getting Fiona’s parents to sign over the kingdom of Far Far Away to him. Rumpelstiltskin tricks Shrek into signing a deal offering Shrek a chance to be an ogre again for a day if he gives up a day from his childhood in return but Rumpelstiltskin takes the day of Shrek’s birth plunging him into a new reality where he was never born, where he never met Donkey (Murphy), saved Fiona and where Rumpelstiltskin rules the land. Shrek finds himself with just 24 hours to find Fiona and make her fall in love with him again to break the deal but the Fiona in this reality is a much different one from the Fiona Shrek once knew.

Shrek Forever After is an enjoyable addition to the series of films. Like before, taking its story from fairytale, this time bringing in Rumpelstiltskin, the film finds fun in looking at an alternate take on the Shrek tale by taking its lead character down a Capra-esque, It’s a Wonderful Life, road. That Shrek Forever After bases most of its story on revisiting past moments from previous Shrek films to offer alternate takes on them does leave the film feeling somewhat unoriginal at times with it revisiting old glories instead of carving out new ones and, as such, does not have quite the same level of satisfaction as the first two films. However, there is still a lot of fun to be had in the film’s story, in seeing it’s characters living alternate lives particularly that of Fiona who becomes far less of a damsel in distress in this tale. There are also some new elements that are enjoyable to see including, for the first time beyond Shrek himself, a look into the culture of Ogres with a range of new Ogre characters though the appearance of the Pied Piper as a villain results in a scene that might entertain younger audiences but is fairly cringe worthy for adults. Shrek Forever After is also quite fun in spite of the dangers Shrek faces with Rumpelstiltskin making an entertaining villain and the use of 3D, for the first time in a Shrek film, being quite impressive.

Performances in Shrek Forever After are dependably enjoyable. Mike Myers, Cameron Diaz, Eddie Murphy and Antonio Banderas are all familiar enough with their roles now to portray them with ease and the chemistry between the actors and their characters is still as enjoyable as before. While names familiar to TV such as Jane Lynch (Glee) and Craig Robinson (The Office) and Jon Hamm (Mad Men) are featured in smaller roles as witches and ogres, the only notable performance beyond the four stars of the film is Walt Dohrn as the voice of Rumpelstiltskin who, while not a known name to audiences and having voiced several minor roles in the Shrek series before, delivers an enjoyable performance as the film’s villain here and showing himself quite capable of living up to past villains voiced by John Lithgow, Jennifer Saunders and Rupert Everett.

A definite improvement over Shrek the Third, Shrek Forever After is a fun addition to the series with plenty enjoyment to be found in its alternate takes on its main characters though the rehashing of old scenes and themes in doing so means the film does not feel quite as original as the first two Shrek films.