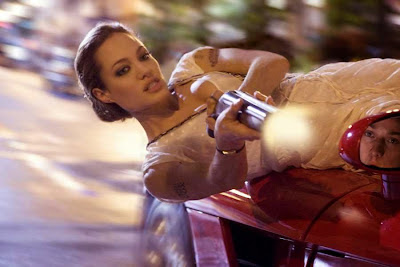 A comic-book based action-blockbuster that brings the same inventiveness and edgy attitude to big screen blockbusters that its source material applied to comic-books.

While Wanted is highly enjoyable action movie full of impressive action sequences further demonstrating the flair that, director, Bekmambetov had shown in the Russian blockbusters Nightwatch and Daywatch, it is however a very loose adaptation of its source material sacrificing some of the comic-book’s moral ambiguities and crazy, though jaw-dropping, spectacle. However, for audiences unfamiliar with the comic-books, Wanted will be, perhaps, the most adrenalin fueled action film of 2008. For fans of the comic, there will be some disappointment over elements removed and/or toned down, but if they are able to overcome this they too should find much to like.

In the comic-books, Wanted is set in a world which once had superheroes, except the super-villains won. The super-villains not only won, but they also erased the memory of the heroes from the world and now run the Earth themselves from behind the scenes. Wanted, the film sacrifices the superhero/villain elements of the comic-books and has the world run by a group of assassins, guiding humanity with bullets. While losing the superhero elements deprives the film of some of the fun of the comics and will upset die-hard fans, it is a smart move as, by removing them, it sets Wanted apart from a summer season already packed with superhero films and instead replaces those elements with some fun new ideas and sequences of its own.

Wanted starts off, like the comics, with our hero/anti-hero Wesley Gibson (McAvoy). A person who, like many, is run down by limitations forced upon him by the world. He works a lifeless office job, suffers under an oppressive boss, and is in an empty relationship where his partner is cheating on him with his best friend. Coupled with McAvoy’s voiceover narrating the misery of his life and his failure to do anything about it, Wanted possesses a mood and outlook that is, fondly, reminiscent of Fight Club. “This is your life.” Where in Fight Club, freedom is obtained by the release provided in fist fights, Wanted takes this further as Wesley finds out he is the son of a top assassins and he is about to find his freedom and destiny involves a gun. When this group of assassins, The Fraternity, inducts Wesley into their ranks after revealing to him his lineage and that his father is now dead, Wesley is trained to unleash his own inner killer, the “caged lion” inside and that he can control his own life dictate its terms and be free of the oppression accepted by most in society. While the comic-books turned Wesley into a killer without morality, Wanted chooses not to lead Wesley that far into the “power corrupts” path preserving a sense of ethics in the character to make Wesley a more sympathetic character.

Wesley’s training complete; the film then departs from the direction set by the comic-books and sets itself on a path of action set-pieces as Wesley then looks to finding his father’s killer and why the killer is out to destroy The Fraternity. It is in the action sequences that Bekmambetov really impresses combining unbelievable ideas with Matrix-style slo-mo to produce sequences that amaze as much in their originality as with the adrenalin infused in them. One action sequence in particular, taking place on a moving train, is likely to be considered the best action sequence of the year while other moments involving bullets colliding in mid air and bending around corners are also impressive.

Performances in Wanted are varied in quality, though the spectacle of the film allows most faults to be overlooked. McAvoy handles his role fairly well in his first lead role of this kind and while he is able to portray Wesley as a loser convincingly at the start of the film, it is sometimes so convincing that it becomes very difficult to believe that he can become the expert assassin he later appears to be, taking until the last half hour to really convince. McAvoy also employs a particularly poor American accent that distracts from his performance on several occasions but does not undermine his entire performance. Supporting McAvoy is Angelina Jolie as fellow assassin, Fox, who delivers all the danger, confidence and sexuality that she is known for and Morgan Freeman gives a solid performance as Mr Sloan, the leader and mentor of The Fraternity.

Overall, this is a very enjoyable action film. While it lacks the courage to dive as deep into consequences that becoming a killer could have on an, otherwise, average man that the comic-book took or even that the film Fight Club (a sort of ‘spiritual cousin’ to Wanted), it still accomplishes much of what it sets out to say and partners it with breathtaking action. When Wesley asks the question “What the fuck have you done lately?” you might want to consider your answer carefully.