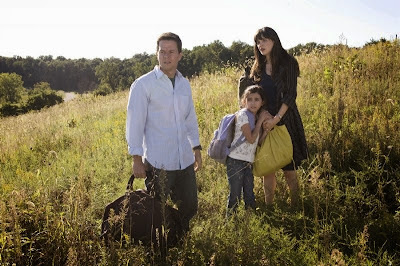 Following the success of The Sixth Sense in 1999 and Unbreakable in 2000, it seemed that M Night Shyamalan had taken the crown of top suspense maker in Hollywood possessing an almost Hitchcock-ian ability to build and maintain suspense while also demonstrating a level of character and romanticism commonly associated with Spielberg. However, in an attempt to live up to the reputation awarded him, Shyamalan has focused more and more on the sensational twists that amazed audiences in his first two films, often at the expense of the suspense and characters with each film afterwards. Signs (2002) demonstrated this flaw in its final 5 minutes with revelations that served to undermine what had otherwise been an excellent drama/thriller. The Village (2004) involved plenty of romanticism and strong characterization but then undermined it with its own ‘twist’ ending. Lady in the Water (2006), in an attempt by Shyamalan to make a film without a big ‘twist’ at the end, now seemed unsure what to do with his characters or story anymore, resulting in a fairytale based drama that alienated audiences.

The Happening is Shyamalan’s latest big screen outing, and unfortunately it continues to follow the pattern of his recent efforts by becoming his most muddled and unsatisfying effort to date. This is not to say that The Happening is without merits. The first half of The Happening is very good. An opening sequence in a public park sets an excellent tone for the film when park-goers just stop what they are doing and then proceed to commit suicide. As people jump off buildings or shoot themselves without explanation the tension level is heightened not only by what we see but by the mystery over what is causing it. Reactions lead the public to panic, speculating a possible chemical weapon attack by terrorists or the possibility that the cause is a reaction caused by nature.

In a world living post-9/11 and also becoming as equally concerned with the environment as it is about terrorism, the precedent is set for Shyamalan to deliver a tense, suspense drama and this is what we get for the first half of the film. Our cast, lead by Mark Wahlberg’s teacher, his wife (Deschanel) and fellow teacher (Leguizamo), try to find safety along with others while also trying to learn the cause of the attacks as they begin to increase. With people panicking and speculating over the attacks with occasional stops to hear reports on radio and television showing and describing other attacks there is an atmosphere that compares, favorably, with Hitchcock’s The Birds.

Once The Happening reaches its halfway point however, the story takes an odd turn that then serves to deprive the film of the conflict and suspense it had been building. As the reality as to what is causing people to commit suicide is made clear, the characters make the decision to move away from the familiar surroundings of cities and small towns and head into the country while splitting into smaller and smaller groups for survival. The attacks possess a chilling quality when they occur in more familiar surroundings and with larger populations but are somewhat lacking in wide open spaces. Once the threat is revealed, it then becomes difficult to make the threat appear as frightening as before, even having scenes of characters running from the wind or stopping to debate their options when in clear view of an attack. Having the characters separate into smaller groups also serves to highlight problems with the characters. No longer able to look sufficiently panicked as part of a crowd when there are people to interact with, Wahlberg and Deschanel look dumbfounded most of the time with Wahlberg suffering more than most being left with dialogue that involves little more than exclaiming “Oh No!” or describing events that are occurring in view of the audience.

Overall, it is Shyamalan’s choices halfway in his story that prevents this film more being better than it is. Taking the characters and story away from the cities and towns, while making sense to the story, deprives the film of the suspense that had made the first half of the film so gripping leaving us with a suspense drama that begins well but very slowly fizzles out as it reaches a quiet, unassuming climax. Shyamalan need to find the balance again that brought him his early success.