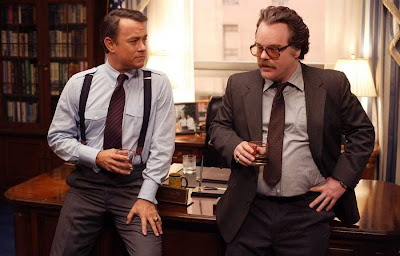 Director: Mike Nichols
Starring: Tom Hanks, Phillip Seymour Hoffman & Julia Roberts
Witty and still thought provoking, Charlie Wilson's War'comes to cinemas after a string of films looking at Iraq and Terrorism. Where this film manages to succeed and seperate itself from the rest is that it deals with events from the 80s where a US Congressmen helped Afghans fight of the invading Russians ending up with a free Afghanistan, one armed and trained by the US. Oh... its also very funny!
Tom Hanks puts on the charm playing the womanising, alcoholic Congressman who was also very committed to fighting Communism and in helping the Afghans fight of a superior invading force while the rest of the US sat back and did nothing.
However, while Tom Hanks is good he is outdone by Phillip Seymour Hoffman as Gus, the gruff CIA man who can predict everything that's going to happen. Hoffman is great to watch as a man frustrated by limitations imposed on him by others in the CIA, often exploding into fits of rage or otherwise dispensing witty and sarcastic insults to those he hates (namely everyone). And the scenes with both Hoffman and Hanks are an even greater joy to watch. In between the witty repartee (the script is by Aaron Sorkin of West Wing fame) though is a film that doesn't sacrifice too much detail. Yes, the last few years of the campaign are squeezed into the last half hour but the build up is well covered without the viewer feeling lost or bored by all the meetings and negotiations.
Overall this is a very enjoyable movie and makes many observations on its events without being preachy and they are observations worth making still today. Hanks and Hoffman are great, and while it would have been nice to see a bit more of Wilson's inner demons under all the charm, you will still be amazed by what he accomplished even if he wasn't able to finish it the way he intended.
Rating: 4/5
Posted by Dan at 16:47