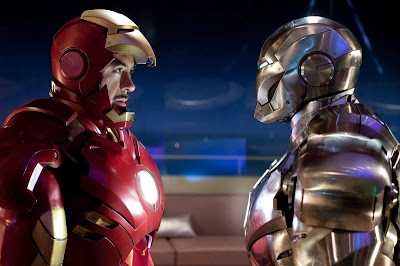 An entertaining sequel that whilst not as fun as the first film due to a disappointing middle act and too many set ups for future Marvel Comics films, is still enjoyable thank in large part to Downey Jr.

An unexpected hit both critically and commercially in 2008, Iron Man revived the Marvel Comics film franchise after the poorly reviewed Spider-Man 3 and even stole some of the spotlight of the, then upcoming, The Dark Knight. Thanks in due part to a well received performance from Robert Downey Jr. in the lead role, which also cemented Downey Jr. as a star once again, and to the direction of Jon Favreau. Not wanting to ruin a winning formula, both star and director return for Iron Man 2 which, while retaining much of what made the first film enjoyable, suffers from the ambition of the studios to use scenes to promote future Marvel Comics films and suffers from a disappointing middle act.

After revealing his identity as Iron Man to the world, Tony Stark (Downey Jr.) faces downsides to his increased celebrity status. He faces the government wishing to seize the Iron Man technology on the grounds that it’s a weapon and wish to adapt it for military purposes, a competing military contractor in Justin Hammer (Sam Rockwell) who wants to put Stark out of business and Ivan Vanko (Rourke) the embittered son of an inventor who was muscled out of his share of the fortune Stark’s father made from technology he helped design. When Vanko manages to re-create the technology Stark invented to power his Iron Man suit to make a weapon of his, attacking and injuring Stark, Vanko is then contacted by Hammer wishing to use Vanko’s skills to create his own army of suits to rival Stark’s. With enemies coming from various directions, Stark has his own health problems to contend with as the materials he needs to power the device keeping Stark alive, is also poisoning him.

When Iron Man was released in 2008, it was expected to do good Box Office, but its success both commercially and critically was much higher than expected, eclipsed only by that year’s The Dark Knight amongst the year’s blockbuster films. With the future of the, then, newly formed Marvel Comics Films studio resting on the success of this film and The Incredible Hulk, the success of Iron Man was very good indeed and with much success being given to the film’s star and director, both were brought back for the sequel with the added intention of using the sequel to build up future Marvel Comics films. Iron Man 2 then is still a very enjoyable movie, but where the first surprised, the sequel has expectations to meet and unfortunately does not meet them all. Downey Jr. certainly impresses yet again as Tony Stark but the direction on behalf of Favreau suffers. This is not all down to Favreau as the intent of the studios to promote future films through Iron Man 2 is obvious whenever Samuel L. Jackson’s Nick Fury appears on screen and whose role and scenes contribute little to the overall arc of the film. The arc of the film too, while starting strong, struggles to capture the fun of the first film with a slow and overly drawn out middle act where Stark’s self-destructive behaviour culminates in a poorly conceived drunken state at a birthday party and fight with his best friend. The arc while intended to give Stark a kind of emotional journey through the film generally distracts from the other leading arcs, that of an enemy born out of his pre-Iron Man past and another in the form of a business competitor taking on Stark, and Iron Man, from different directions which ultimately results in a climax featuring more men in suits fighting men in suits.

Fortunately, the casting helps save the film. Downey Jr., aside from the drunken birthday sequence where even he fails to make his character charming, is otherwise great as Stark with witty one-liners and plenty of charisma in the role he seemed born to play. Sam Rockwell is great as Stark’s business competitor, a man who has Stark’s ambition but none of his charm, ethics or ability who is always slimy but his ambition making him dangerous still. Mickey Rourke as Ivan Vanko, AKA Whiplash, is enjoyable when trading a war of words with Stark or with Hammer but is somewhat of a pantomime villain when it comes to taking action though is still decent. Gwyneth Paltrow continues to impress as Pepper Potts with great onscreen chemistry with Downey Jr., while Don Cheadle fills the role of Rhodey, originally performed by Terrence Howard, with ease making you wish he played the role all along and Scarlett Johansson is likewise enjoyable in a role that could have been little more than pouts but is actually more fun.

Overall, Iron Man 2 is certainly an enjoyable sequel to the first film but doesn’t equal it. Some obvious set up for future Marvel Comics films and an overwrought emotional arc for Tony Stark that results in a disappointing middle act to detract from the overall enjoyment but the performances of the cast, the generally fun tone maintained at other times and a few enjoyable action sequences mean the film is still an enjoyable superhero film.