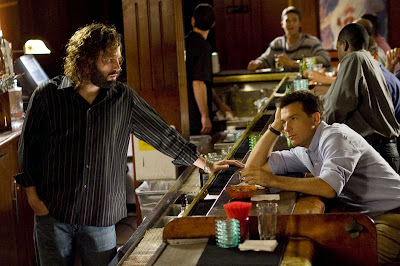 An average comedy from Mike Judge that has some funny moments but is too laid back in its pacing to offer anything memorable.

Still best known for the popular TV series Beavis & Butthead and King of the Hill, Mike Judge’s forays into cinema have been mixed. Starting off strong with the little seen Office Space which garnered positive reviews and a cult following then came the overly ambitious Idiocracy which suffered poorly in reviews and reception and now comes Extract. Dialling back the scope to more of the workplace based humour that succeeded so well with Office Space, Extract has some amusing moments and has a good cast but the ambition has been pulled back too far with the film too laid back, slow in its pace and in its comic timing that while nice, doesn’t leave the film feeling particularly memorable.

Joel Reynolds (Bateman) owns and runs his own extract business, producing a popular food flavouring and providing Joel with the autonomy to be his own boss and be more of a friend to his workers than a manager. However, feeling particularly unfilled with his sex life at home, seeing an accident occur at his factory that leaves him open to a lawsuit and interest in a buy out coming from a larger business, Joel finds his life becoming more stressful and unfulfilling than he’d like. With the arrival of Cindy (Kunis), a drifter and con-woman (unbeknownst to Joel), Joel is convinced by his bartender friend Dean (Affleck) that he could be happier in his life and love life if he gets someone to seduce his wife thus allowing himself the freedom to pursue Cindy without the guilt of adultery. Things don’t go to plan and Cindy’s own plans on profiting from Joel’s situation threatens bring down Joel, his business and his marriage.

Despite a good cast and some enjoyable laughs, it is initially difficult to find any characters to like or root for in Extract unlike with Office Space. That the lead character even contemplates tricking his wife into committing adultery to allow him the freedom to commit adultery himself does make it difficult for Joel to be a sympathetic character until much later when he realises his selfishness and struggles to repair the damage he’s done and still his emotionally distant wife is the more sympathetic character. The other characters in the film, mostly workers in the extract plant, are a generally entertaining group of misfits and small-town stereotypes but as much humour can be derived from these characters, the situations they become involved in and in Joel’s situation too are often too infrequent with Mike Judge’s pacing throughout the film feeling far too laid back even when compared to similar, more successful efforts from the director in the past. The jokes themselves even lack the sharp insight into working environments that Judge brought to Office Space and to King of the Hill. There is nothing particularly bad in the film in regards to the jokes themselves or most of the characters but nothing particularly stands out as being memorable either.

Extract does boast a good cast. Jason Bateman is decent in the lead role of Joel, ably demonstrating the character’s dissatisfaction and lack of ambition and his struggles later to fix his situation but the performance suffers due to the role itself with Bateman’s Joel a less sympathetic or witty version of characters Bateman has played in films or TV shows like Arrested Development. Ben Affleck puts in a generally enjoyable performance as Joel’s even more laidback bartender buddy Dean continuing the actor’s recent streak of enjoyable supporting roles though the other main performance in the film, Mila Kunis’ as the con-woman Cindy is much less likeable. While the likeability may be part of the point in regards to her character’s intentions, Kunis’ performance is muddled and attempts to be likeable failing. J.K. Simmons, Beth Grant and Clifton Collins Jr. put in decent performances as fellow factory workers, particularly Collins Jr. whose accident at the plant places him in the manipulations of Cindy and Kristen Wiig is generally sympathetic as Joel’s wife and while Dave Koechner plays against his usual type of loud, brash character as Joel’s annoying neighbour, it feels like his annoying nature is Judge’s attempts to create another character in the mould of Office Space’s Bob Lumberg but failing.

Extract has a decent cast and some decent laughs but generally feels too slow and lacks likeable characters making the film pretty disappointing overall. Mike Judge’s laidback style works well on TV and with the film Office Space that had a much sharper script, but here he struggles to create anything memorable for good or bad.