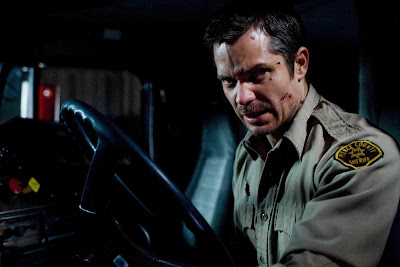 A decent horror/thriller that, while not offering anything particularly original to the genre, nevertheless offers decent scares and performances from its cast.

In addition to the rise of horror films dubbed “torture porn”, Hollywood has also turned its focus towards remaking horror films of the past to drive the genre in the present. With some remakes seeing commercial, though not always critical, success such the remakes of Dawn of the Dead, Halloween, The Hills Have Eyes and My Bloody Valentine, as long as they continue to be successful, the remakes will continue. The latest, The Crazies, comes to cinema screens with the benefits that it is remaking a horror film with less of a fan following than some other films that have been remade. As such, while still lacking in originality, The Crazies still thrills and does feel an improvement over the original film.

In the quiet town of Ogden Marsh, Sheriff Dutton (Olyphant) finds himself in trouble when an investigation into a pair of murders caused by seemingly normal residents in his hometown turning homicidal reveals evidence of a plane crash in the marsh outside of the town which may have released a contaminant into the town’s water supply. With the risk of an infection spreading through the town and affecting the populace, Dutton with his with Judy (Mitchell) and deputy Russell (Anderson) find themselves struggling to stay alive and escape the town when government forces descend upon the town to contain and eliminate the infected and while the populace of the town go crazy and run free.

While featuring some effective jumps and scares throughout, The Crazies, much like the original film from the 70s, is most effective when it portrays the gradual breakdown of normal people into crazed killers. With dead eyed stares and monotonous repetition of simple phrases that give the impression of zombies, the results are somewhat less disturbing amongst the more faceless residents that the main characters encounter during their escapes but when the fear causes them to look at one another is when the tension rises. When one character turns to another and asks “I’m not right, am I?” it is both sad and frightening. However, such moments become less frequent as the number of infected rise and the film shifts from a slow build up of fear to more action, fighting and traditional scares. The Crazies, like the original film, also offers the interesting approach of having its main protagonists caught between both the people they once knew and the forces trying to contain the outbreak. The government presence adds to the desperation whilst offering slight comparisons to government responses to outbreaks and other threats in light of recent wars and viral outbreaks like Swine Flu though such comparisons are rarely explored in any depth.

Timothy Olyphant (of TV’s Deadwood) makes for a decent leading man, playing it stoic throughout even though his character and performance lacks the nuances of past roles such as Sheriff Bullock in Deadwood. Radha Mitchell also is decent as the Sheriff’s wife and town doctor but again gives a performance generally limited to reacting to the chaos around her. Joe Anderson, having worked with Olyphant recently in heist comedy High Life, has good chemistry with Olyphant’s Sheriff as his deputy and gets the most opportunity of any of the cast to develop his role as his character slowly comes to believe he is infected himself and making both audiences and other characters uncomfortable as his early calmness gives way to frustration and anger. Of the main cast, only Danielle Panabaker really disappoints though this is mostly due to her character being barely featured or developed by the script.

Overall, The Crazies is fairly predictable and not particularly original but it has some decent performances from Olyphant and Anderson and some reliably chilling and jump-worthy scares to make it worth a watch.