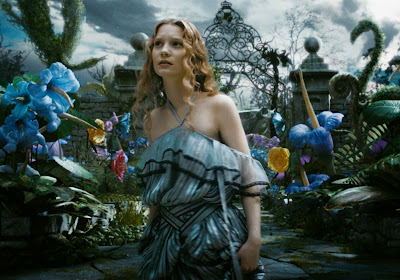 An enjoyable adaptation/reimaging of the Lewis Carroll novels that, while not wholly satisfying, is intriguing for its approach to the material and enjoyable for Tim Burton’s visual style and some fun performances amongst its cast.

Lewis Carroll’s Alice books have seen many adaptations in film and television throughout the long history of both mediums, highlighting the popularity of the books and their characters amongst generations of readers and audiences. When it was announced that Tim Burton would helm another feature film adaptation of the books, expectations were raised as the director’s popular visual style and depth of imagination which made his films so popular seems perfectly suited to the realisation of Wonderland on screen. What we finally see though is an adaptation of mixed results that, while enjoyable, does not quite live up to expectation. Alice in Wonderland features Burton’s impressive imagination in the representation of Wonderland and its inhabitants, features some enjoyable eccentric performances from its cast but despite not being a straight adaptation of the books, the film is somewhat let down by its conventional story structure and a tone that reminds you that this film is produced by Disney.

Plagued with dreams and nightmares of visiting a strange land called Wonderland since she was a child, the now 19 year old Alice (Wasikowska) finds herself frustrated with choices available to her regarding her future. With her dreamer of a father having passed away years earlier and her being expected to marry a rich husband irrespective of her feelings towards him or her own ambitions, Alice flees from a public engagement when she sees a rabbit in a waistcoat and finds herself falling down a rabbit hole to awaken in the Wonderland of her dreams. Convinced that she is still dreaming, Alice finds herself drawn into the affairs of Wonderland, called Underland, now under the rule of the tyrannical Red Queen (Bonham Carter) with the inhabitants of Underland attempting to drive her towards a destiny there that she does not want but is she even the Alice they are looking for, the Alice they need to slay the Red Queen’s fearsome Jabberwocky and free Underland from her rule?

Tim Burton’s adaptation of Alice in Wonderland is an enjoyable film with some quite curious direction choices, many of which at least intrigue if they don’t completely entertain. Burton’s realisation of Underland is certainly beautiful to behold. It is brimming with near-Technicolor in places whilst bearing sinister tones in the realms left damaged by Red Queen’s takeover years before. Some elements are unmistakably Burton-esque, others ripped cleanly from the illustrations accompanying early editions of Carroll’s novels while darker scenes even bear a hint of Terry Gilliam (himself a filmmaker clearly influenced by Lewis Carroll too) that the film never ceases to be appealing to the eye. Also interesting and enjoyable are the larger changes to Carroll’s original tale in this adaptation. Alice is now much older and her character, and the film, given a somewhat more feminist sensibility as Alice struggles to fight against the role society assigns her in the real world yet finds herself under pressure to be what others want her to be in Underland. However, not all changes result in satisfying results. The reorganising of characters in events in the book works in some places but ultimately leads up to a rather conventional battle sequence between the soldiers of the Red and White Queens whilst also, with this adaptation being funded and produced by Disney, there are rarely any moments in the film of danger with the tone a little too soft throughout.

Performances throughout the film are generally enjoyable. Mia Wasikowska is an enjoyable Alice, sceptical of the reality with which see is presented and stubborn and uncooperative when trying to be forced into a role she does not want or is not ready for. However, Wasikowska struggles to hold her own when sharing the screen with the larger personalities of Depp and Bonham Carter. Depp and Bonham Carter are both enjoyable despite playing roles that are underwritten and rely upon eccentricities of personality to make up for it. Bonham Carter gives the most satisfying performance of the two; her Red Queen a character short tempered with a Diva level ego and demands to match. Johnny Depp adds another colourful character to his list of performances and while his Mad Hatter is fun, Depp’s performance cannot help but feel like a patchwork of parts from other characters he has played in the past and with his character given perhaps too much screen time. The voice casting in Alice in Wonderland however, does not disappoint. With Michael Sheen, Alan Rickman and Barbara Windsor all enjoyable as the White Rabbit, Absolem the caterpillar and Mallymkum the dormouse respectively whilst Stephen Fry is charming as the Cheshire Cat.

Overall, Alice in Wonderland is an enjoyable film. It looks great, appealing to fans of the books and of Tim Burton’s style whilst the story features some interesting changes to the original story and some fun performances amongst its cast. However, some of the more obvious Disney touches leave the tone too light at times and the film wraps up in a climax too similar to that of the Narnia films to satisfy making this film enjoyable, but not as much as might have been expected from Burton alone.