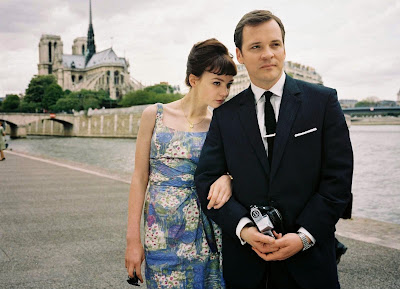 A charming coming of age tale that manages to issues of it’s 1960’s setting’s attitude towards women and education and the age differences of its main characters whilst also infusing the film with warmth, humour and a great performance from Casey Mulligan.

Based on the true life experiences of writer Lynn Barber and her book, An Education has been adapted for the big screen by popular author Nick Hornby, whose previous experience with film has been on the receiving end of having his own work adapted for the screen. The result is a film that has a lot of genuine emotion and truths but features Hornby’s gift for snappy, witty dialogue that makes An Education a genuinely enjoyable film rather than one that is over-driven by the drama of the events depicted.

Jenny (Mulligan) is a 16 year old girl in 1962 England. Driven by her father, Jack (Molina), to succeed in school so that she might get into Oxford University and have a promising education and future ahead of her, Jenny does however wish for a more exciting life like those depicted in the French films and music she adores. When a stranger named David (Sarsgaard) arrives one day and offers to give Jenny a lift home to avoid the rain she finds herself attracted to this older man and his more carefree lifestyle of parties and trips to Paris. Even Jenny’s parents are lured in by the charming David, however as the less savoury side of David’s lifestyle peek through and the differences in their ages and desires become more relevant, Jenny faces a reality less glamorous than she expected and one that might threaten her initial goals of getting into Oxford.

While at first it may seem as though An Education’s humour and charm might undermine and soften the more serious aspects to the relationship between Jenny and David in the film and the threats to Jenny’s future, the humour and charm actually work well in different ways. Firstly, the film’s charm which is helped by Hornby’s script and Mulligan’s performance as Jenny, helps to lure the audience into David’s lifestyle almost as well as it lures in Jenny and whenever something unpleasant or suspect arises you soon find yourself won over again by the film’s charm which is again much like how David manages to keep Jenny interested until it is almost too late. Whether this occurs by accident or design is unknown, it nevertheless adds to the film’s message and atmosphere as well as also punctuating the drama with moments of warmth and laughter meaning the film almost flies by and still manages to feel important with over dramatising the film’s story. The attention to detail towards capturing the mood of the era in which the film is set as French culture grew in popularity yet just prior to real revolution with women’s rights, the film presents the era as also a period on the verge of change much like Jenny herself.

Casey Mulligan leads the performances in An Education with very impressive performance as Jenny. A relative newcomer after just few television roles, Mulligan’s performance is filled with confidence and manages to not only convey Jenny’s intelligence and drive but also her vulnerabilities in a cohesive, loveable whole as if Mulligan was a more experienced actress. The performance here marks Mulligan as a talent to watch. Peter Sarsgaard is good as David, losing his American accent for an English one that sounds like a faux-middle class accent which serves to help with his performance as a man who isn’t all what he seems and gets by in life as well as with Jenny more by his talent for talking and charming others. He portrays David as a sometimes charming and sometimes suspicious character and while sometimes his behaviour can make the audience uneasy, he manages to avoid coming across as too predatory. Alfred Molina is engaging as Jenny’s rather stuffy father which is likeable if somewhat cartoonish at times and there are several good supporting performances from Olivia Williams as Jenny’s struggling teacher, Emma Thompson in a rare mean role as Jenny’s head teacher, Dominic Cooper as David’s friend Danny and an impressive turn from Rosamund Pike as Danny’s somewhat vapid girlfriend Helen.

Overall, An Education is a very charming and enjoyable drama that avoids too much melodrama but is no less insightful or dramatic in light of all the film’s warmth. Witty and smart with a wonderful performance from Casey Mulligan, An Education is a great coming of age tale.