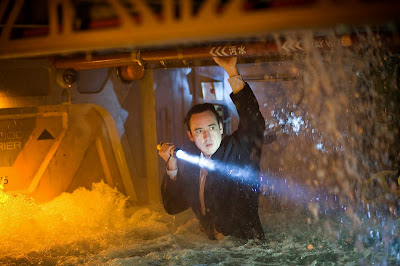 Entertaining for its depiction of destruction on a global scale, 2012 lacks much of an actual plot and characters though Cusack puts on a likeable performance as the main lead.

Having not been satisfied by global, though mostly America-centric, destruction with his previous films like Independence Day and The Day After Tomorrow, director Roland Emmerich raises the level of his appetite for destruction to show the end of the world. 2012, like many disaster films in general, places less emphasis on three dimensional characters and original plotting than it does on portraying the disasters themselves and placing characters into life or death situations. The result is film that never really engages with its story but nevertheless offers thrills despite the global carnage involving virtually every kind of natural disaster already committed to film.

When geologist Adrian Helmsley (Ejiofor) is alerted in 2009 of a raise in the temperature in the Earth’s core caused by solar flares, he immediately informs the White House and other world leaders that the rise in heat will soon melt the Earth’s crust resulting in the crumbling and movement of the Earth’s crust which would cause untold devastation through Earthquakes, volcanoes and tsunamis. Three years later in 2012, the government learns that the devastation will occur much sooner than expected as they rush to save as many people as they can on giant arks that they have been building secretly in China. Meanwhile, former writer Jackson Curtis (Cusack) in an attempt to spend time with his children who live with his ex-wife Kate (Peet) becomes aware of the impending destruction and the government’s secret arks whilst on a camping trip at Yellowstone Park and races to save his family and get them to China and safety.

Emmerich’s latest global catastrophe, while even greater in scale than ever before, is also his least original effort to date. With 2012, as impressive as some of the global devastation is, Emmerich appears to have approached the film it may be his last with this film featuring almost every natural disaster imaginable but, given that most of these have been the subjects of films before, they aren’t always that impressive here. There are volcanoes and their dust clouds (Dante’s Peak, Volcano), Earthquakes, tsunamis (Emmerich’s own The Day After Tomorrow) and even sinking ships (The Poseidon Adventure). While visually the devastation is quite impressive and will certainly entertain the audiences coming to see the effects, there are limited thrills to be had with most incidents in the film. Those that do thrill happen fairly early in the action, in particular are two sequences involving Cusack’s character trying to get his family out of a collapsing Los Angeles and then again escaping Yellowstone Park that are exciting due to their faster pace but in the latter half of the film there are only so many tsunamis and falling monuments that be witnessed to sustain audiences and an overlong addition of a Poseidon Adventure-style threat at the end of the film once the cast have reached their means of safety drags the already long film into being far too long.

Performances in 2012 also range from average to forgettable. John Cusack makes the best impression as the lead character of Curtis Jackson who while fulfilling the role of earnest leading man trying to regain the love of his family. Keeping the character likeable, Cusack makes for a decent leading man. Other actors, otherwise excellent when performing in smaller films, add a little credibility to their roles but they remain otherwise one-dimensional with actors like Chiwetel Ejiofor, Amanda Peet, Oliver Platt and Danny Glover trying their best and Woody Harrelson being the only one truly entertaining as a conspiracy obsessed radio show performer who Cusack’s Curtis encounters at Yellowstone Park.

Overall, with most of the sequences of devastation having already been depicted in other disaster films and characters yet again taking a backseat in development over the effects, 2012 offers nothing that be called original and the film is far too long with a misguided decision to work a Poseidon Adventure style sequence into the finale. However, some of the sequences still manage to thrill, particularly in the first half of the film and some performances like Cusack and Harrelson’s are likeable.