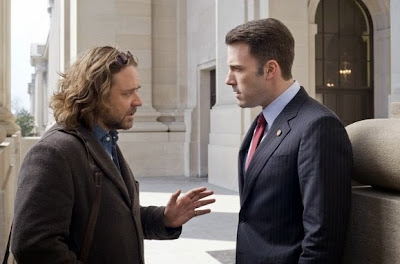 An excellent political thriller that adapts the BBC series to the U.S. and to the cinema screen admirably with a strong performance from Russell Crowe in the lead.

Originally an award winning, 6-part, 6 hour, BBC mini-series from 2003, State of Play adapts the plot of the original mini-series about a journalist’s investigation into the death of a woman linked, romantically, to an old friend who is now a politician from London, England to Washington, USA and also casting Russell Crowe and Ben Affleck (replacing the originally cast Brad Pitt and Edward Norton) in the roles originally performed by John Simm and David Morrissey in the BBC drama. Fortunately the cinematic adaptation succeeds very well in capturing the essential elements of the original story and presenting them in an intelligent and entertaining manner for the big screen.

Cal McCaffrey (Crowe) is an old school journalist, shunning the world of online reporting and the rising preferences of making scoops over actual investigative reporting, he is following the story of a thief murdered one evening that also left a witness to the incident in a coma. When a woman dies in a subway train accident and is suspected to be a suicide, McCaffrey is harassed by colleagues for information when the woman is revealed to have been working for McCaffrey’s old roommate, now a politician, Stephen Collins (Affleck). Initially reaching out to Collins as a friend rather than as a reporter and to his Collins wife Anne (Robin Wright Penn) especially when news that the dead woman had an affair with Collins, McCaffrey then gets involved in a larger story when the dead thief he was covering appears connected to the dead woman on the subway. Was the woman murdered like the thief? And what does it have to do with the investigation Collins is undertaking against a military contractor profiting from war? The investigation takes McCaffrey and an opportunistic young reporter named Della (McAdams) into a cover up of subterfuge, shady corporate dealings and tests McCaffrey’s friendship with Collins.

Despite having to suspend some disbelief to accept that Crowe’s McCaffrey could ever have been college roommates and friends with Collins when Collins is played by the much younger Affleck, State of Play manages to be a very gripping thriller. The occasional line of clichéd dialogue to remind you of what is at stake and a scene that reminds you that bad things happen in underground parking lots, especially in films, never really harms the enjoyment of the film. The plotline, while condensed down from the BBC series’ original 6 hour running time to 2 hours, manages to maintain the more important details and keeping some of the major themes of the series intact and, whilst also twisting and turning with the investigation taking McCaffrey, Della and Collins ever deeper also manages to avoid the usual plot holes and stretched logic that many films of this genre are plagued by. The script remains mostly intelligent thanks to the involvement of screenwriters such as Tony Gilroy (Michael Clayton) and Billy Ray (Shattered Glass) and the film is also helped by some strong performances by its cast.

Russell Crowe, all shaggy haired and disheveled in appearance, gives McCaffrey the sense of integrity and commitment that his character required. Confident and intelligent whenever he needs to be, charming when its required but also keeps McCaffrey believable when he’s faced with errors particularly the swift, and believable, change in manner Crowe portrays in a scene where McCaffrey knocks on the wrong door at the wrong time. Despite being too young for the role, Affleck manages to impress too, giving Collins the necessary amounts of earnestness and sympathy in spite of his character’s flaws whilst McAdams is likeable, perhaps too much, as the eager junior reporter out for a big story. Along with Helen Mirren as McCaffrey’s editor and Robin Wright Penn as Collins’ suffering wife, State of Play benefits from a strong cast of experienced actors.

Overall, despite the occasional cliché and the, perhaps, error in casting two actors with 9 years between them as long time friends in the lead roles, State of Play is nevertheless a gripping thriller. Smart, well acted and very enjoyable.