Let The Right One In 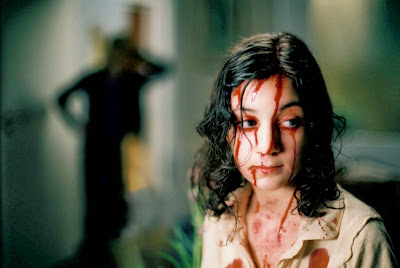 An excellent horror/drama from Sweden that develops a touching childhood relationship whilst also proving there are still new depths to explore in vampire myth.

With the vampire mythology, particularly in film and television, becoming more mainstream in recent years whether it be as the subject of teen romance (Stephanie Meyer’s Twilight novels and 2008 film adaptation), action and adventure (the Underworld films) or straight attempts at horror (2007’s 30 Days of Night based on a popular comic book series), it makes it more difficult to find new stories to tell involving vampires. Fortunately, Sweden’s Tomas Alfredson brings us Let the Right One In, based on a novel by John Ajvide Lindqvist, which tells the story of a touching pre-teen friendship where vampirism is used to explore themes of alienation, violence and childhood innocence.

Set in the early 1980s, Oskar is a 12 year old boy suffering with feelings of loneliness. Oskar’s parents are divorced with Oskar’s time spent between them and Oskar faces problems with bullies at his school with no one he can turn to for support. In the midst of winter, Oskar meets Eli, a 12 year old girl who has recently moved in next door with an older man, only comes out at night and, like Oskar, seems to feel alone. Over a series of evenings, Oskar and Eli build a friendship and keep each other company whilst Eli advises Oskar to stand up to his bullies. While their friendship develops, the local residents are worried by news of a serial killer working in their neighbourhood who drains his victims of their blood, the killer who may be the older man living with Eli. As it becomes clear that Eli is a lot older than she appears and that the purpose of the murders occurring locally are connected to Eli, Oskar nevertheless finds himself drawn to Eli because of their friendship.

Let the Right One In, whilst involving vampires and vampire lore, focuses on the friendship between Oskar and Eli and on the themes of childhood friendship and innocence than on themes of horror, though scenes of horror are also present. Despite their obvious differences, Oskar and Eli find much in common in their feelings of being alienated from the world around them and the support each provides the other (Eli finds a friend that accepts her despite what she is while Oskar finds a friend he can talk to about his problems and can give him support and advice). The secrets they trust one another with demonstrate a more touching sense of intimacy than a sexually driven relationship could accomplish. That there is much more implied to Eli’s nature than just her vampirism (one brief, and explicit, shot raises more questions than it does surprise) and that Oskar’s acceptance and their friendship continues is a more insightful statement of the innocence of children and of love between friends than any encountered recently in American cinema.

Let the Right One In also explores certain aspects of vampire lore that have seen little development in cinema. Explored in the film are the effects of eternal youth on a vampire such as Eli who has lived longer than most but not allowed to grow up and also into the rule that a vampire cannot enter a residence without an invitation and what the consequences could be if they should cross the threshold without permission, hence the film’s title. Finally there is exploration into the effects of violence with parallels running through both Eli and Oskar’s lives. Eli witnesses and lives with the consequences of the violence committed to ensure her survival while Oskar’s attempts to fight the violence of the bullies he faces, at school, with violence escalates towards a confrontation at the film’s finale that will remain one of the film’s most memorable sequences.

The performances in Let the Right One In are driven by its two child actors. Rather than cast older actors, Alfredson casts newcomers Kare Hedebrant and Lina Leandersson as Oskar and Eli, both of which are the age of their characters and deliver very impressive and believable performances. Leandersson in particular is impressive as Eli who manages to infuse Eli with an air of experience and weariness of someone much older than her outward appearance would initially suggest whilst also maintaining an even balance of childlike naivety in regards to interacting with the world around her.

Overall, Let the Right One In is an impressive film. Touching and intelligent, filled with subtle and insightful explorations of several themes all within the trappings of a vampire film. Featuring strong performances from its lead actors and a level of believability enhanced by its low budget look and natural exploration of its characters, Let the Right One In is a very rewarding film and should rank highly amongst the best vampire films.