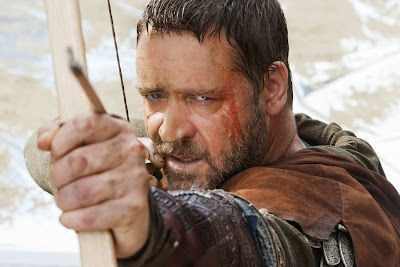 An enjoyable new take on the Robin Hood myth that takes various stories and sources and weaves them together into an entertaining drama with enjoyable performances and Ridley Scott’s reliably impressive visuals and action sequences.

With Robin Hood having undergone many interpretations on the big screen and on television, with comedy straight actions films, some serious drama and others comedy, Ridley Scott’s take underwent several revisions on its way to the big screen. With rumours abound of the film originally being titled Nottingham with the Sheriff being written as the hero, and Robin Hood the villain, the version of the story coming to the big screen now is far more in keeping with traditional ideas of the character. Robin Hood does bear some resemblance to descriptions of it being Gladiator with bows and arrows but it still an enjoyable film and one set to establish the character’s origins and legend rather than be an adventure that runs with them already established.

Following the Crusades and battles in France, King Richard (Danny Huston)’s armies are heading back to England. When a battle sees Richard killed and an ambush sees his crown stolen and its caretaker Robin of Loxley dying, an archer from Richard’s army named Robin Longstride (Crowe) is entrusted with a mission to return the crown to England and Loxley’s sword to his father Walter (Max Von Sydow) in Nottingham, which Robin accepts with some allies. Having witnessed Loxley’s murderer, an Englishman named Godfrey (Mark Strong), Robin’s life is at risk as Godfrey is a friend of, the now, King John (Isaac) and intends to bring down England for the French. Robin, on his arrival in Nottingham, is talked into masquerading as Loxley and therefore as husband to Maid Marion (Blanchett), to maintain the Loxley estate and soon finds himself and his friends drawn into a battle to save England from Godfrey’s men and from the tyranny of King John.

While there are issues that could be made with Robin Hood that would be well founded such as descriptions that the film is Gladiator with bows and arrows or that the actors accents are unconvincing, these generally don’t detract from the enjoyment of the film. Yes, the accents are sometimes questionable but are far ahead of other attempts in past films that have featured non-British actors and while Gladiator comparisons can be reflected in Ridley Scott’s visual style, action scenes and the presence of Crowe, there are more than enough differences to make such comparisons mostly superficial. Ridley Scott’s attempts, with screenwriter Brian Helgeland, to blend different fictional accounts of the Robin Hood legend with various historical evidence to suggest the character existed, are admirable. The film has some of the trappings familiar to the legend such as bows and arrows, Nottingham, the woods, King John, Marion, the Sheriff and Merry Men but none of these are overly dominant with the film feeling more like an origin story for Robin Hood, tying it into to a specific historical period/context, and developing the elements most associated with the character so that this film ends where most tales of Robin Hood begins. The film is a story of how the man became Robin Hood and the newer elements of historical events and political intrigue mix together quite well. This being a Ridley Scott film, the film is shot impressively too but the film also features some unexpected warmth as seen with the interplay between Robin and Marion, Robin and his Merry Men and between the Merry Men themselves that helps ease the overall serious tone of the film.

Russell Crowe is enjoyable enough as Robin Hood. His attempts at a Midlands accent are mixed but impress at the attempt and fortunately his Robin is more a man of actions than of words and when he must make a speech, Crowe is still able to command even with the accent. Cate Blanchett is a good Marion, with her character more in common with Eowyn of The Lord of the Rings than with past Marions, a character willing to fight as hard as any man rather than remain just a love interest. Mark Strong is pretty forgettable as the main antagonist Godfrey but Oscar Isaacs is enjoyably vain and slimy as King John, getting in many good lines and scenes while Matthew MacFadyen is also enjoyable despite little screen-time as the Sheriff of Nottingham with a performance that could easily be the younger version of the Sheriff Alan Rickman performed in Robin Hood: Prince of Thieves. Kevin Durand, Scott Grimes and Alan Doyle are likeable and fun as Little John, Will Scarlett and Alan A’Dayle respectively and Max Von Sydow and William Hurt round out the cast as the wiser, older characters Walter Loxley and William Marshall.

With an enjoyable story mixing myth and "facts" into an origin story, some enjoyable performances and impressive cinematography, Robin Hood is more than just “Gladiator with bows and arrows”, though such descriptions do partially fit. This might not be the most fun of Robin Hood films, more drama than adventure, but it nevertheless well made and performed.