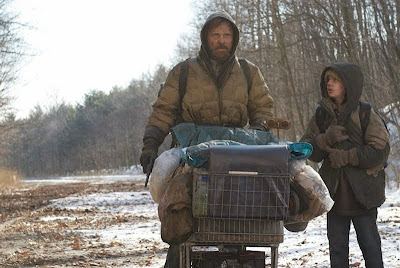 A fine adaptation of the McCarthy novel with the bleak outlook of a post-apocalyptic future that still manages to find heart in the relationship of its central father and son characters.

Despite having seen his novels adapted before, Cormac McCarthy and his work received much attention and acclaim in recent years as the adaptation of his novel No Country for Old Men by the Coen Brothers went on to receive wide critical acclaim while his latest novel, The Road, became a critical success too and a commercial bestseller. Before long, The Road was moved into production for the big screen with John Hillcoat, the director of the well received The Proposition at the helm. In spite of delays in getting the final version of the film to the big screen (filming had completed over a year before its release), the film has been worth the wait, remaining very faithful to the book and managing to be gripping and emotionally engaging despite constant images of bleakness and horror.

Following an unnamed disaster that has left the Earth a near desolate wasteland with the human race near wiped out, the remaining survivors struggle to survive and find food whilst avoiding those willing to kill for supplies and the horrors gangs of cannibals also roaming across the country. Living the best they can are a Father (Mortensen) and Son (Smit-McPhee) who are heading for the coast in the hopes of a better life there whilst the Father also tries to teach the values of being good to his son despite facing ever more desperate circumstances.

Already experienced in filming in seemingly harsh, desolate landscapes such as the Australian Outback for The Proposition, John Hillcoat is an ideal choice for filming The Road where desolation is essential to the mood of the film. With minimal us of CG, used to add to live action locations rather than replace them, the post-apocalyptic future of The Road looks bleak and very believable. A feeling of cold and lifelessness can be felt throughout. The story itself, whilst episodic in nature with a few familiar faces cast in supporting roles of those the Father and Son encounter on their travels, each encounter is carefully handled, with each different in the types of threat they represent. One encounter with the Son held captive is suitably tense whilst another where Father and Son come across a lair with human prisoners in the basement is filled with horror or an encounter with an old man portrayed with feelings of pity and sorrow. All add to the overall portrayal of life for our main characters in this world and each represent challenges to the heroic way of life that the Father is trying to teach his Son to uphold. As effective as many of these scenes are, as touching as the father and son relationship is and as well portrayed as the future may be, there are some moments in The Road that are less successful such as flashbacks to a period where the Son’s mother was still present which, while visually adding a contrast to the present day scenes by being shown in warm tones, suffer slightly in the casting and in not adequately developing the breakdown between the Father and Mother.

In the lead roles of Father and Son, Viggo Mortensen and Kodi Smit-McPhee are strong. Mortensen, while no going to the extents Christian Bale went to for Rescue Dawn or The Machinist, went to extent of depriving himself of food that he would appear believably emaciated as a man struggling to find food in the world of The Road. Mortensen’s commitment to playing a man who is committed to securing his son’s survival is not limited to his physical appearance and Mortensen brings an intense seriousness to his portrayal of the Father that his love for his son is without doubt. Smit-McPhee is the most impressive though, being the human heart of the film and impressively portraying the Son’s, almost naïve, belief in good and the good of others yet still accustomed to the reality of the life he is living and the harshness of it. Robert Duvall also gives a strong performance in his brief role as a blind man who foresaw this future. Charlize Theron is the only disappointing performance in the film, partly due to her looks which while showing the effects of living in the post-apocalyptic world is still too clean, too glamorous compared to the rest of the film and doesn’t get enough opportunity to really develop her character.

Overall, The Road is a faithful adaptation of Cormac McCarthy’s novel. Hillcoat effectively builds a post-apocalyptic future that is believable in appearance and in the bleakness of it’s mood while Mortensen and Smit-McPhee deliver strong performances as the Father and Son whose relationship is the driving force of the film. A grim, yet emotionally touching story of parenthood and warning of the future.