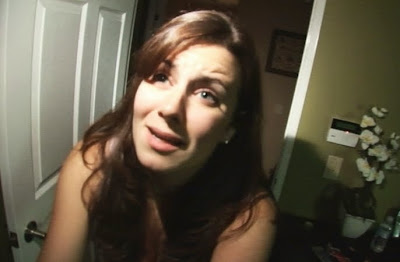 A very scary and expertly handled horror that shows that there is still potential in The Blair Witch Project formula and showing that horror needs not always resort to extreme violence to generate scares.

Filmed on a low budget of merely $15,000, Paranormal Activity has since received critical acclaim at the 2008 Sundance Film Festival and become a hit film in America. Fortunately, the film lives up to the hype taking a very simple plot and set up and delivering a chilling horror film without the need for well known actors, extreme gore or big budgets. Using the gimmick of ‘found footage’ of a supposed real event in the style of 1999’s The Blair Witch Project, Paranormal Activity is far more effective in its execution.

Couple Katie (Featherston) and Micah (Stoat) decide to set up a camera in their home, at Micah’s request, to attempt to capture footage of what is occurring in their home at night after having experienced several incidents of strange noises in their home which has Katie convinced she is being haunted after having experienced similar phenomenon throughout her life. After calling in a psychic who claims it is Katie being haunted and that they should not attempt to antagonise the spirit, Micah’s continued attempts to film and prove the spirit’s existence leads to an increase in incidents and in their severity with several incidents finally caught on camera and the danger facing the couple becoming life threatening.

Using an incredibly simple set up involving a static camera in the night time scenes filming events in the couple’s bedroom while having Micah use a handheld camera throughout the day to document the pair’s reactions to events going on around them and what they should do about it, Paranormal Activity is surprisingly effective. Director Oren Peli certainly makes the most of his set up with the night time sequences filmed on a static camera proving to be an impressive use of limited resources. The bedroom itself and placement of the camera is delicately done to allow full view of our sleeping couple whilst being able to see beyond the bedroom door into the hallway and just able to glimpse other rooms in the darkness. Using shadow and mainly sound effects (footsteps, creaks), Peli builds up the tension slowly over many nights of footage to the point where a suddenly slamming door or a light randomly turning on and off in a far room can generate jumps and tension and with the somewhat amateurish look of the film and of its actors lending a feeling or authenticity to the events being witnessed that a glossier, bigger budgeted horror with known faces would be unlikely to achieve. There are the usual concessions to the horror movie genre and stereotypes that do sometimes detract from the scares such as bringing in a psychic or a moment involving Micah following a sound into the house’s loft that still feel clichéd in spite of the film’s look, but otherwise the film is effective even if you don’t ascribe to any belief in the supernatural.

Not much can be said about the acting in Paranormal Activity. Filmed around mainly two actors played by amateur actors, even keeping their own first names on screen, the performances are fine enough that you get a feeling of their fear and reactions but beyond their reactions to the events around them there is little added development to either character with Micah in particular feeling almost stereotypically sceptical of the events and unsupportive of Katie’s needs until it is too late. Nevertheless, for the purpose of the film’s approach, the anonymity of the actors does add believability to their performances and sympathy for their situation as it gets progressively worse.

Overall, Paranormal Activity is an incredibly effective horror film that makes the most of its low budget to achieve genuine scares. While it occasionally follows familiar horror movie clichés, the simple set up and almost authentic look of the film makes this a more believable and frightening horror than its bigger budget, gore driven competitors. Recommended.