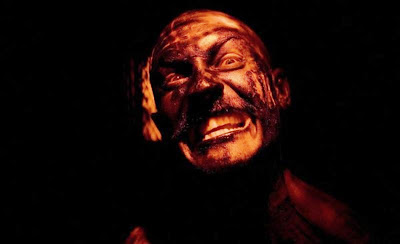 An interesting approach to a biopic in this film about England’s “Most Violent Prisoner” results in an interesting film but one that is also only occasionally enjoyable.

Charles Bronson, born Michael Peterson, is a cult figure in British society. Seemingly driven to make a name for himself he has somewhat succeeded with his reputation for being “the most violent prisoner in Britain” having been arrested in 1974 for stealing £26.18 from a Post Office, Bronson has spent most of the 35 years since in prison (with just over 4 months on parole in total over the same period) and has spent all but 4 of those years confined to solitary for acts of violence against prisoners and guards, rioting and hostage taking. In addition to his reputation for violence, Charles Bronson has also becoming an award winning poet, artist and author. It is these latter aspects of his history that has influenced this film on his life the most.

Bronson tells the story of Charles Bronson as if portrayed through a theatrical performance performed by Bronson himself (here played by actor Tom Hardy). With frequent cuts to scenes of Bronson on stage telling his story to an unseen audience with jokes and putting on make up to play the roles of people he has encountered, this biopic takes an interesting approach to an otherwise formulaic genre. How much of what we see is based on actual truths and how much is false bravado on the behalf of Bronson? It is an enjoyable approach and one that allows Tom Hardy to portray Bronson as the larger than life character that he may believe himself to be and that some that know of him already believe. On occasion the performance feels OTT but then, admitting early on that he, Bronson not Hardy, can’t really act means that the moments of OTT acting actually serve the performance rather than detract from it. If there is one aspect of Bronson that is most memorable, rather than the inventive approach to the narrative, that aspect would actually be Tom Hardy in his approach to playing Charles Bronson. Bronson is a role unlike any Hardy has played before and is, no doubt, the most intense character he’s portrayed in his career so far. Putting on weight and building up muscle for the role, Hardy looks the part and Hardy is also careful to make the most of his physicality to aid in his portrayal.

However, despite a memorable performance from Hardy and the stage performance approach to the story and the portrayal of events, the story of Bronson himself, as seen in the film, frequently fails to generate much interest beyond a few scenes. Bronson’s earlier life, pre-imprisonment, is interesting as are the scenes dealing with Bronson’s later years as an artist, but in between the film frequently gets repetitive with too many scenes of Bronson getting in a fight and getting locked away again and again. When Bronson cuts away at one point to insert actual news footage from the riot and hostage taking at Broadmoor in 1983, it entertains and educates but also serves to remind us how less interesting some of the performed sequences from Bronson’s incarceration are in comparison. Also, while sometimes entertaining, the moments of OTT can also be quite intrusive leaving the film with pacing and a tone that is quite uneven especially when it becomes uncertain as to whether it is glorifying Bronson’s attitude to imprisonment or trying to portray the harsh gruesomeness of it.

Overall, while ambitious in its approach and featuring a very memorable turn from Tom Hardy, Bronson is still only an average story about one of Britain’s most notorious criminals. Bronson is definitely a curious film and one with cult appeal but its overall value lies in its lead actor’s performance and its narrative approach rather than in Bronson’s own story.